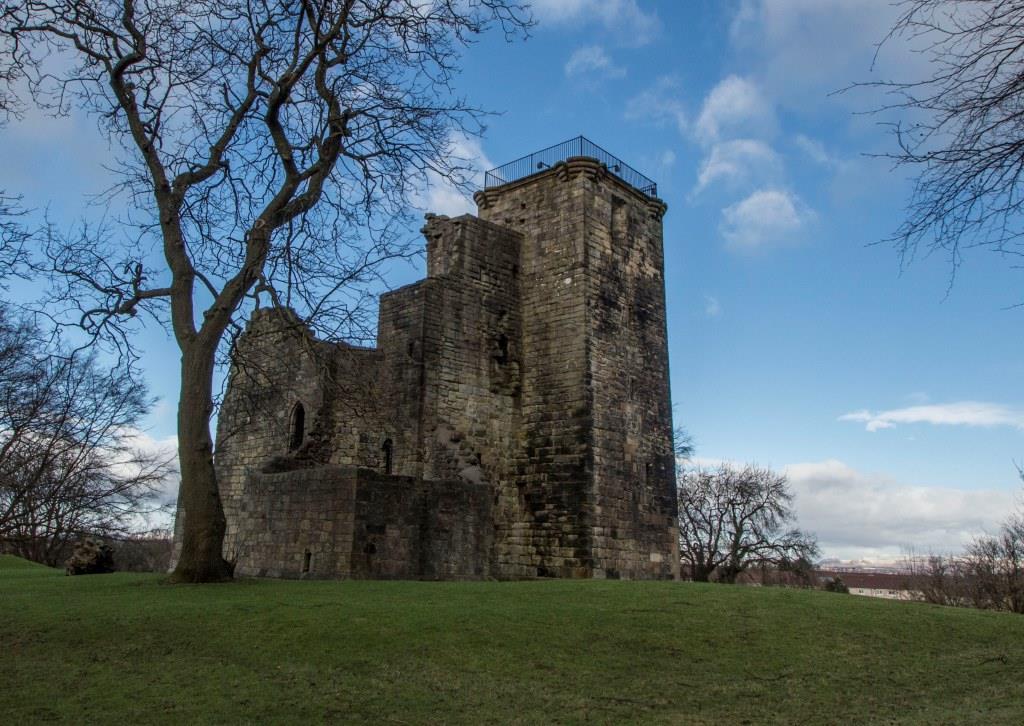 Crookston Castle is a large, unusual shaped tower built by the Stewarts of Darnley within the earthworks of a 12th or 13th century castle of the Croc family. The site is on the top of a hill overlooking the Levern Water in Pollok, between Glasgow and Paisley. The site is accessible at all times, but the tower is closed outside of reasonable hours.

The earthworks consist of an oval bank and deep ditch which augment the natural strength of the hilltop location, and around the edges are traces of buildings and walls, including a possible gatehouse on the eastern side. These can be best appreciated from the top of the tower as they are mostly overgrown with grass. The “keep” is a rectangular tower of the 15th century, which has seemingly been altered with the addition of four square towers in the corners, one of which survives to its full height due to restoration in the 19th century, and two are little more than basements. The entrance, unusually, is in the ground floor, and although well defended is perhaps not original.

Inside the tower, the basement is rib-vaulted, as it the basement of the surviving corner tower, and the great hall on the first floor is double height, and also vaulted, access between the floors is via straight stairs within the thickness of the walls. Access to the roof of the corner tower is via a very narrow metal stair, but the views are spectacular.

The castle of the Croc family was built perhaps in the 1170s, as the castle chapel has been dated to c1180. The family line ended with an heiress who sold the estate to – or married – Sir Alan Stewart of Darnley. The family were made Earls of Lennox in 1488, and rebelled against King James IV, who besieged the castle with cannon including Mons Meg, which was used to destroy the western end of the tower. By the end of the 16th century the castle had been largely abandoned, and was sold several times until it eventually passed to the National Trust for Scotland, who remain the owners, although Historic Scotland are responsible for maintaining the building.