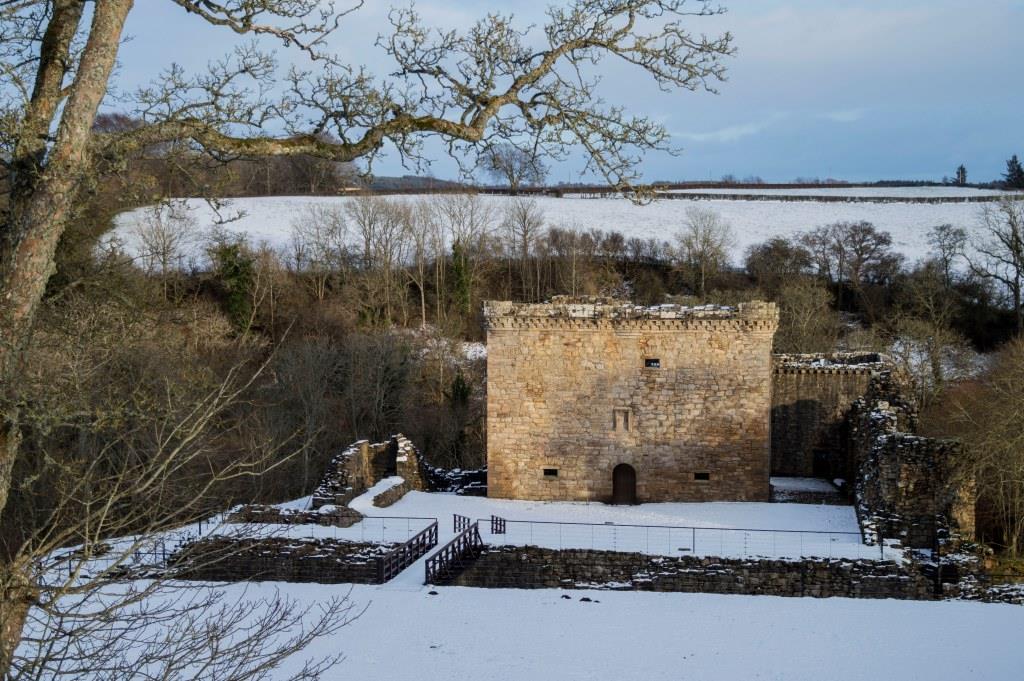 Craignethan Castle is built upon a rocky clifftop promontory overlooking the River Nethan, a tributary of the Clyde, a few miles downstream of Lanark. It is set out as two courtyards in line, separated by a deep ditch, and in the inner courtyard is a rectangular tower-keep. Dating to the early 16th century, it was built by James Hamilton of Finnart specifically to withstand artillery fire, one of the earliest so designed.

Craignethan was a property of the Douglas family, but with their rebellion and forfeiture in 1455, it was granted to James, Lord Hamilton as part of his reward for turning against the Douglases during the Siege of Abercorn Castle – once he had been returned to favour. The site is a very strong one, and it seems possible that a castle of the Douglases did occupy the peninsular before the Hamiltons gained it, but nothing of such a castle survives unless it is the ditch or hidden within the tower-house. Craignethan was granted to James Hamilton in 1530, and he set about adapting or building fairly quickly. His castle consisted of a massively thick and tall wall across the peninsular behind the ditch, and a courtyard behind defended by six squarish towers. Towards the rear of the courtyard was the tower-house, whose parapet would have barely topped the curtain wall.

Hamilton was beheaded for treason in 1540, and the castle passed to his brother the 2nd Earl of Arran two years later. It was the Earl who added the outer courtyard, which is an irregular four sided area defended by a wall, gatehouse and two small square towers. He opposed the marriage of Queen Mary to Darnley, and was forfeited, but regained his estates briefly before the Battle of Langside. Craignethan Castle changed hands several times between 1568 and 1579, and after the Hamiltons fled to France Finnart’s huge wall – over 5m thick, was pulled down along with the NW tower. In the 17th century Andrew Hay bought Craignethan and built himself the house in the outer courtyard, and in 1730 it was purchased by the Duke of Douglas. The castle remained in the hands of his descendants until it was handed over to state care in 1949. Today it is maintained by Historic Scotland, and open seasonally for a fee.

The castle is commonly associated with Sir Walter Scott, who considered restoring the castle for his dwelling prior to building Abbotsford, and his readers decided it must have been the inspiration for the castle of Tillietudlem in “Old Mortality”. Scott denied the connection, but this did not stop the railway station being named for the fictional castle, and the connection appears to have stuck with the small settlement that grew up nearby bearing this name.