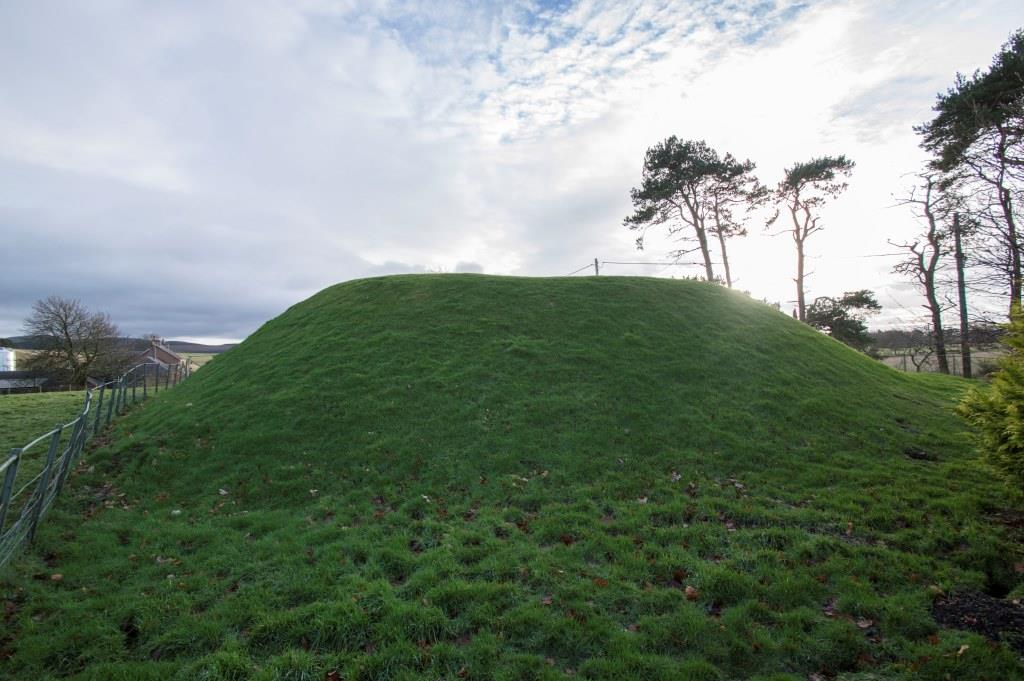 Coulter Motte can be found just to the east of the unclassified road at Wolfclyde, just to the north of the A72 west of Biggar in Lanarkshire. It is built on the east bank of the River Clyde, and is open to the public, being maintained by Historic Environment Scotland, but the squarish enclosed area is literally just around the motte, with no viewing area at all.

The remains consist purely of a small oval motte, about 2.5 metres high, with a flat summit perhaps 15 metres by 12. There was a small bailey which extended to the south and east, but this is not part of the public area and cannot really be discerned today. Any trace of a possible ditch surrounding the motte has also been lost. There is an interpretation board which shows an image of a motte and bailey castle but does not really give anything specific about the site.

The history of the castle is unknown, but it was probably the residence of the family of Alexander de Cutir, who witnessed documents of the Earl of Lennox in 1241 and probably held the estate of Coulter at that time. The estate was split in two in the 1360s by which time the castle had almost certainly been abandoned or destroyed in the wars with England, and was never reoccupied. Later owners of the estate included the Bissetts, Menzies family, and Melrose Abbey from 1431. It is a similar size and shape to the castle at Abington, just by the Abington Services on the M74. This castle was also on a site overlooking the Clyde, and in theory the castles may have controlled this section of the Clyde valley. However it is more likely they were simply castles built as the centre of a Clydesdale landholding without a wider strategic purpose. As true motte and bailey castles are rare in Scotland, and not a native form, it is likely that the de Cutir family were of Flemish origin, and were incomers to Scotland from the reign of David I or his grandsons Malcolm IV and William, and were retainers of the Flemings who settled at Biggar.