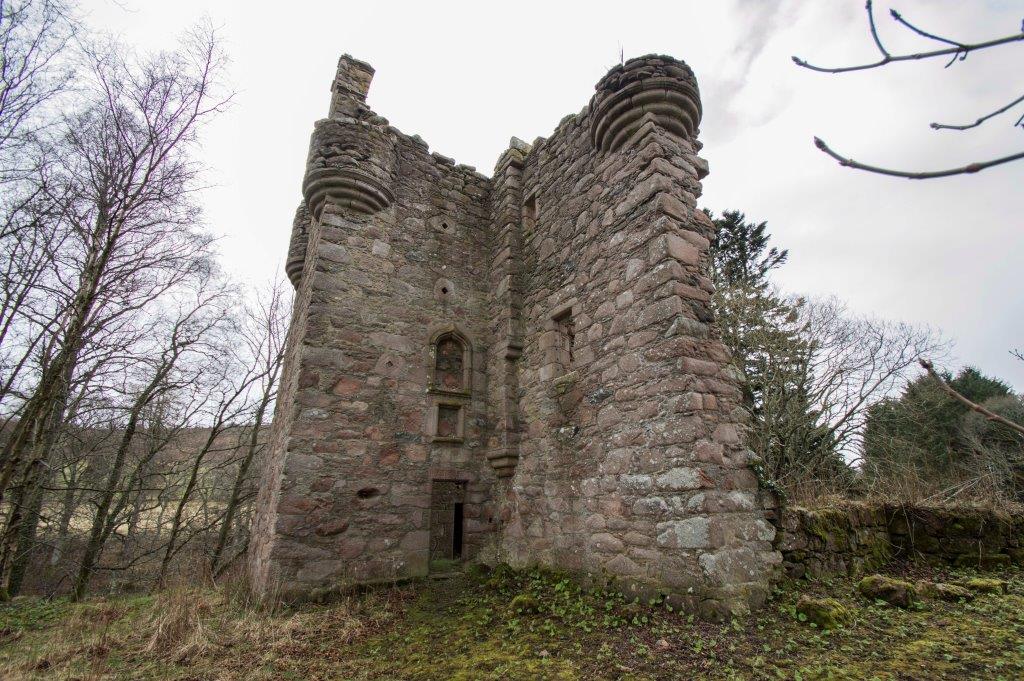 Corse Castle is a ruined 16th century tower house which looks southwards over the glen of the Corse Burn towards Corse Hill. The burn flows past the better known Craigievar Castle and eventually into the River Don, and is a short distance from the strategic route now followed by the A980 connecting the upland areas of the Don and Dee Valleys. The castle is accessible to the public, but does involve climbing over a stile.

Corse was a possession of the Forbes family from at least the 15th century. The first Forbes of Corse was a younger son of the 2nd Lord Forbes called Patrick, who held the position of armour-bearer to King James III, and was granted the lands of Corse along with Kincardine and Coull, in December 1476. His son David had the lands of Corse and Kincardine erected into the barony of O’Neil in 1511, and was followed by his son Patrick. It was Patrick’s son William who built the castle at Corse in its current form, following its destruction in a raid. It is not clear what form the first tower took, but the tower of Corse today is a rather unusual design which may therefore incorporate earlier work. William had four sons, one of whom, Patrick, was born in the old tower, and was to become Bishop of Aberdeen as well as laird of Corse. A second son, Arthur, was killed in Ireland after being made the first Baronet Forbes of Castle Forbes in Co. Longford, a third, John, was Presbyterian minister of Alford. The final son, William, purchased the unfinished Mortimer castle of Craigievar and completed the building, founding the line of Forbeses of Craigievar. Bishop Patricks son John was a Professor of Theology at Aberdeen University, but was expelled by Covenanters and died at Corse in 1648, to be followed by his son George. After this, it is not clear what happened to Corse, but it remained within the wider Forbes family until its destruction at an unknown date.

The castle in its final form was built as an L-plan tower, with a round tower on the north-west corner, and a further round tower midway along the south wall. The ground- floor entrance was in the angle of the tower, and faced north. Above the doorway are the initials WF, the date 1581, and the initials ES, commemorating the construction of the castle and the names of William Forbes and Elizabeth Strachan. Above this are two empty niches which contained heraldic panels, or perhaps a religious icon. There are no internal walls or floors remaining, and the north-western tower and the adjacent section of the tower are reduced to foundations; but this tower was notably thinner than the rest of the castle. It is to be assumed this area was the kitchen from the large area suggestive of a fireplace. The basement was liberally supplied with shot holes, and further diamond-shaped shot holes can be seen elsewhere on the building. A curious feature is the rectangular projection where a stair turret might be expected in the angle of the tower; this may have been a chimney flue. Oddly, there is no clear evidence of vaulting at basement level, which one might expect for a tower of this date, and there appears to be variation in the masonry in the east wing next to the south tower which may suggest repairs. However the cellars are below ground level and maybe the evidence for vaulting lies beneath the debris. The south tower contained a staircase serving all floors, and there were at least three turrets at attic level in the corners. The internal layout is next to impossible to identify, but it seems likely that the eastern side of the tower constituted the “wing” as there appear to be more floors intended here (three plus the attic above the ground floor level) than to the western part, which appears to have had a higher ceiling to the first floor hall, which was certainly reached via the southern stair. One final mystery is the presence in the north-western corner adjacent to the round tower of a wide splayed opening which would appear to have been a door – a second doorway on the ground floor would be a very unusual feature. Corse is a hugely interesting ruin, and well worth the visit as a counterpoint to the later and more magnificent Craigievar.