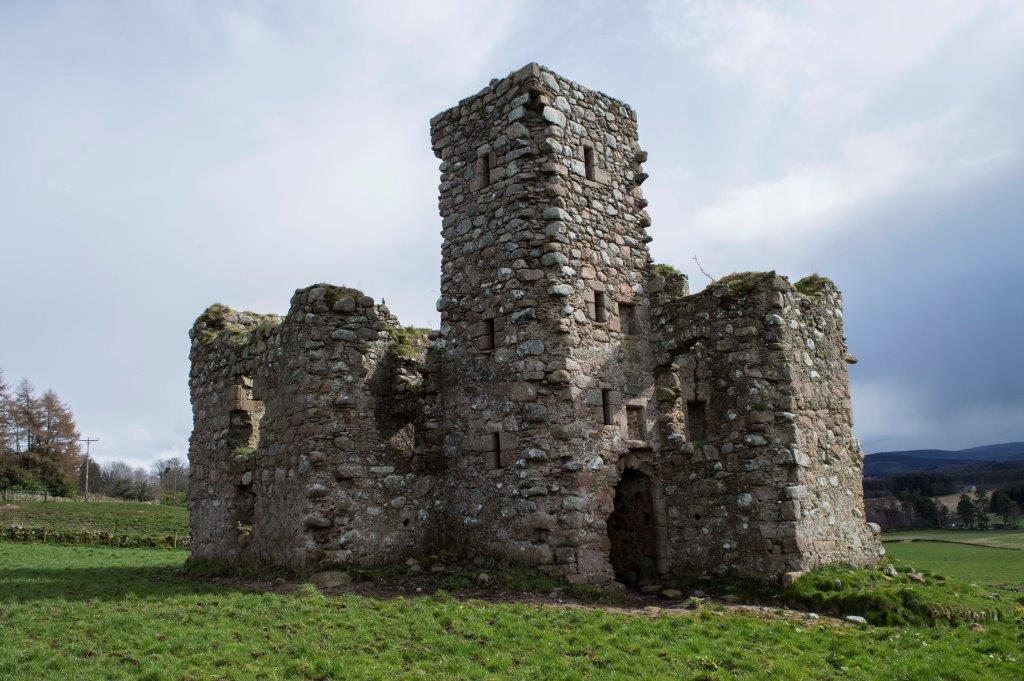 Cluny Crichton Castle can be found on a rising piece of farmland overlooking an area of drained marshland to the south. It can be seen from the A980 north-west of Banchory, and is a ruined tower house of the 17th century. To the west is the Burn of Cluny, which disappears into the extensive system of drainage ditches. The location is defensive, with good views to the south, but has no wider strategic significance as one might expect from the construction date.

The tower is built on an L-plan, with a square tower in the angle to the north-west, and was three storeys tall with an attic above. The upper storeys of the building have largely fallen, with the square tower surviving to a larger extent than the rest of the building. Above the entrance doorway is a panel which reads “16 Clu 66 Crichtoe” and there are two recesses for heraldic panels which are missing. The stairwell is lit with small windows, and the basement rooms also have tiny slits for light, showing that even at this late date defence was considered relevant at Cluny Crichton Castle. Two shot holes can also be seen in the basement, one defending the door, the other the approach to it. Joist holes in the walls show that there was no vaulting to the basement, normal for a mid 17th century tower house. Within the square tower, a round void housed the spiral stair leading to all floors, and several of the doorways to the staircore survive. The ground floor consisted of three rooms of roughly equal size, each of which could only be reached from the entrance hall. The central room was provided with a fireplace and a small adjacent cupboard, suggesting it was the kitchen. Ascending the stairs, at first floor level the door lead to the western room, perhaps serving as the dining hall of the castle. A doorway from here led to the room above the kitchen, which may have been a withdrawing room and was provided with a strong cupboard in the thickness of the stair tower wall, and a recess which may have served as a cupboard to store the silver. From here a door led to the north room, which was perhaps a further withdrawing room. All rooms were provided with fireplaces on the first floor. The second floor level has not survived well enough to suggest a layout, but was reached by a stair in the northern room, and also appears to have consisted of three interconnected rooms. The staircore ended in a watchroom slightly above this level, and the attics were reached via a stair from the northern room on the second floor. It is likely that the western rooms were considered a wing, and that the roofline had two ridges running north-south. There is no evidence of a courtyard or anciliary buildings surviving.

Very little is known of the history of Cluny Crichton Castle. In 1640, Sir Thomas Burnett of Leys took possession of Cluny from Alexander Burnet of Cluny for a debt of 5255 marks, and granted it to the son of his second marriage, William Burnett. Cluny was inherited by Alexander Burnett in 1654 as heir to Sir Thomas, and in 1664 by his son, another Sir Thomas. There is no mention of a castle at this point. William Burnett had a sister, Elizabeth, who was married to Robert Douglas of Tilquhillie to the south of Banchory, and their daughter was a lady called Jean Douglas. In about 1665 she married George Crichton, said to have been a relative of the Lords Frendraught, and it is this couple who are believed to have built Cluny Crichton Castle. It seems probable that Cluny passed to Jean Douglas as a dowry, but the marriage was childless. There are a few references available that the castle reverted to the Douglases, but I’ve found no evidence to support this. The Douglases of Tilquhillie were crippled by debts associated with supporting Charles I, and Tilquhillie was handed over to their creditors, so perhaps Cluny Crichton was occupied by them since it was not part of the Douglas inheritance. The eventual fate of the castle is unknown, but as one corner has been completely demolished a deliberate destruction appears likely, perhaps during the Jacobite period. Today access is possible with the permission of the farmer, who offers self-catering accommodation on the farm.