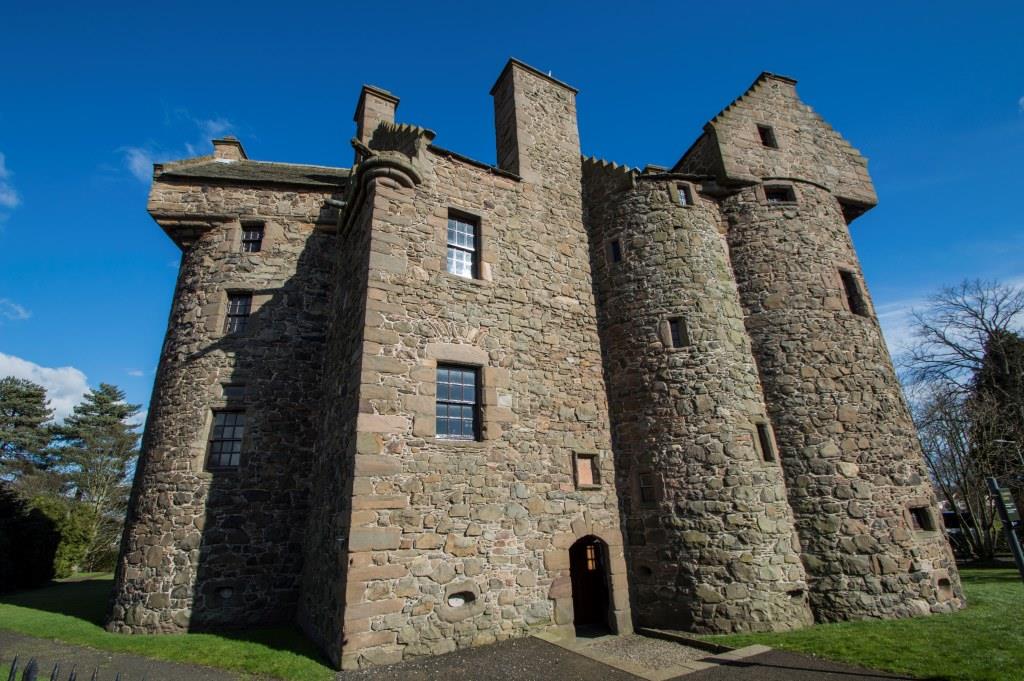 Claypotts Castle is an unusual and striking Z-plan tower house on the outskirts of Dundee, with diagonally opposed round towers on either end of a rectangular hall-block. Both round towers are crowned with corbelled out square cap houses, and are served with a round stair turret from the ground floor level. It was built in the 16th century by the Strachan family, and is occasionally open to the public.

Inside the castle is sparsely furnished, and has a number of items of interest, but the primary reason for exploring it is the complete and unaltered nature of the layout, which mostly retains the 16th century plan. Basements are vaulted, and there is a single great hall on the first floor. Upstairs the main block does not retain a dividing wooden wall, but this is the only significant omission. Fireplaces, cupboards and even a small chamber off a bedroom for a privy all survive.

Claypotts was an estate held by the Abbey of Lindores from at least 1246, and was leased by John Strachan from at least 1511. The Strachans erected the castle in the 1560s, and possibly extended it in the 1580s as there are two datestones – 1569 and 1588, one on each round tower. It has been suggested that the later stone on the northern tower records a repair or extension upwards. The Strachans were fined for failing to provide soldiers in the 1540s, and they were ordered to surrender the tower in 1594, but otherwise little is known to have happened at the castle during this period. When the Reformation brought the superiority of the Abbey to an end, the Strachans sold the estate to their neighbours the Grahams of Ballunie, and in 1619, it was sold again – to Graham of Claverhouse.

The Claverhouse Grahams lived elsewhere, and are unlikely to have spent much time there. When the last of the family, “Bonnie Dundee” was killed at Killiecrankie in 1689, the estate was forfeited, and in 1694 was granted to the Marquis of Douglas. A descendant of the Marquis, the 13th Earl of Home, handed it over to the state in 1926, and the castle remains managed by Historic Scotland. If you want to visit, check with Historic Scotland about internal access as the castle is rarely opened.