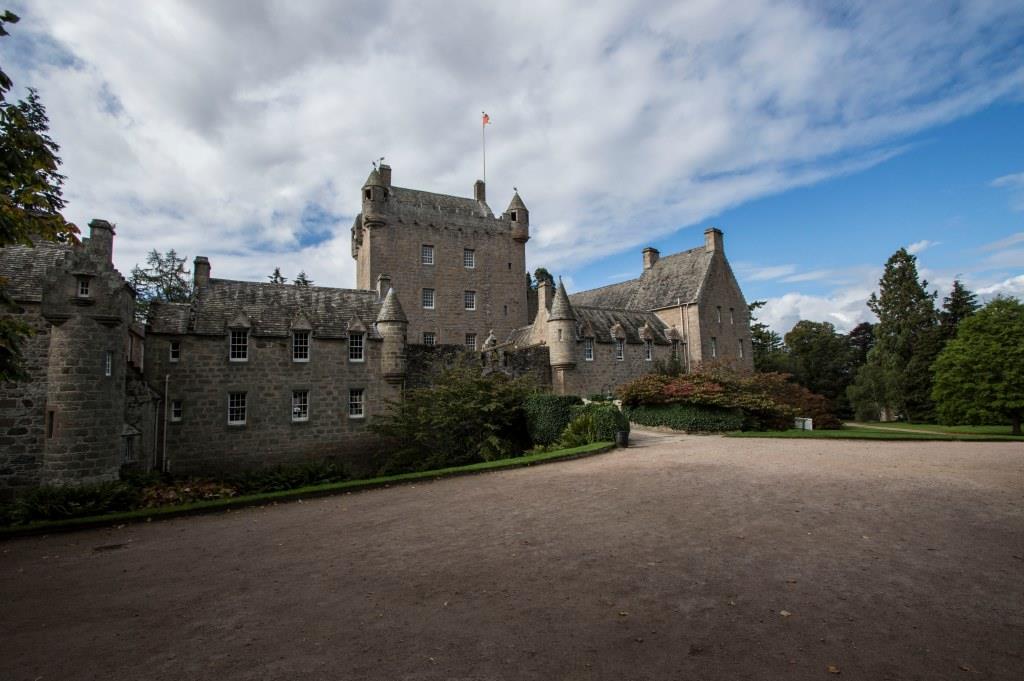 Cawdor Castle is again one of the famous castles in Scotland, largely due to Shakespeare’s association of the place with MacBeth, although it is a really nice castle in its own right, and in the publicly accessible areas allows you to go inside the square tower. As is the case with Glamis, it is extremely unlikely that MacBeth ever had anything to do with Cawdor, but this should not deter the visitor.

Cawdor is built around a 14th/15th century square tower house, which was originally entered at the first floor – the door can still be seen. The tower consists of a single room at all levels, connected by a staircase in the thickness of the walls. In the vaulted basement can be seen physical proof that some legends are based in fact – or created from unexplainable fact. A dead tree can be found in the basement, still in the ground. Carbon dating has shown that the tree died in about 1372. Legend says that the castle was built on the site where a donkey laden with gold stopped to have a rest under a tree, and the castle was built around it. An exchequer entry for 1398 mentions Calder Castle, which may therefore have been a royal foundation.

There were thanes of Cawdor, who bore the surname Calder – the two spellings were interchangable – and the tower was certainly built by one of them on a riverbank. The license to crenellate – or fortify a dwelling – was granted in 1454, and it may be that the tower house was erected at that point upon the site of an older building. It would have been surrounded by a stone courtyard wall, and evidence can still be seen of the ditch which surrounded it; it is unlikely this was a wet ditch except in times of severe flood, unless it has filled up significantly.

The Calders line ended with an heiress, who married John Campbell in 1510, and since that date the Campbells have held the castle and estate. Ranges of buildings were added around the courtyard in the 16th and 17th centuries, including the entire riverside range. These used the courtyard walls as external walls, and therefore follow the lines of the ancient courtyard. An entrance passageway was knocked through into the tower at 1st floor level in one corner, incorporating it into the mansion, but this was the only entrance point to the tower.

The third floor of the tower is also vaulted, and much higher than the other ceilings, and it may be that the floor levels have been altered. Certainly the turrets are reconstructed, dating from the 17th century, and the whole layout may reflect changes carried out in the 17th century. A second family of Campbells acquired the castle and estate by marriage to the heiress of Cawdor, and it was this second family that so drastically extended the castle, and whose armorial can be seen in the courtyard.

Towards the end of the 17th century the Campbell laird married an heiress in Wales, and moved south, leaving the castle to become the residence of younger sons of the family, and a summer residence. In the 19th century the southern and eastern ranges were built to create a new courtyard, and it was at this time that the new drawbridge structure was created. The Campbells returned to Cawdor in the 20th century and the castle and gardens are open to the public.