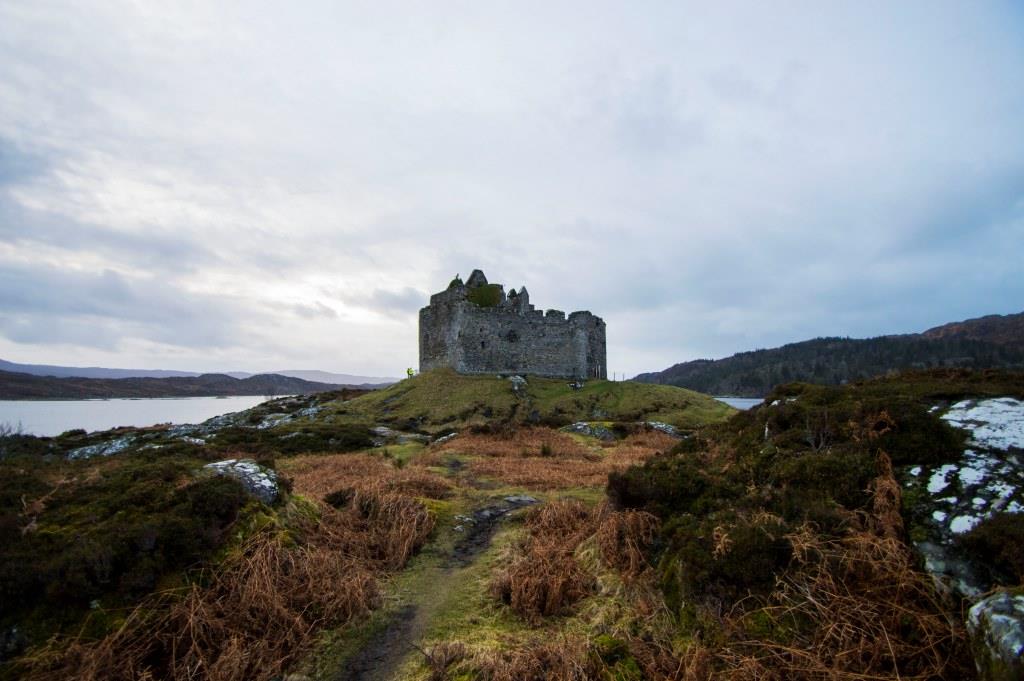 Castle Tioram is a small polygonal courtyard castle with alterations from the 14th to the 18th centuries, and occupies a tidal island by the entrance to Loch Moidart on the west coast of Ross. It is considered unsafe, and although access to the island itself is possible at low tide, the castle itself is fenced off.

The castle was probably built in the 13th century, at which point it consisted simply of the curtain wall – albeit at a lower height than today, and an arched gateway. Moidart lies in the heartland of territory dominated by the Lords of the Isles, and after the familial strife following the death of Somerled, fell to the MacRuari kindred.

Although the MacRuaris struggled to maintain their independence from the Scottish throne – supporting the Norse against King Alexander at Largs – it was Christina MacRuari that provided support to the refugee Robert Bruce. She resigned a large part of her inheritance to her illegitimate brother Ruari, including Castle Tioram. The square tower is said to have been the work of Amy, his daughter, but has not been conclusively dated. Amy was the founder of the Macdonalds of Clanranald, who then lived at and maintained the castle until the 17th century.

In the 1715 Jacobite rebellion, the castle was garrisoned by government troops, who were surprised by a group of rebels who captured and then burned the castle. By the mid 18th century the castle was considered to be ruined, and plans were made to repair it, but these had not been carried out by the close of the 1745 rebellion, and the plans were never brought to fruition. The castle has remained unoccupied ever since, and is perhaps one of the most romantically situated castles in Scotland.