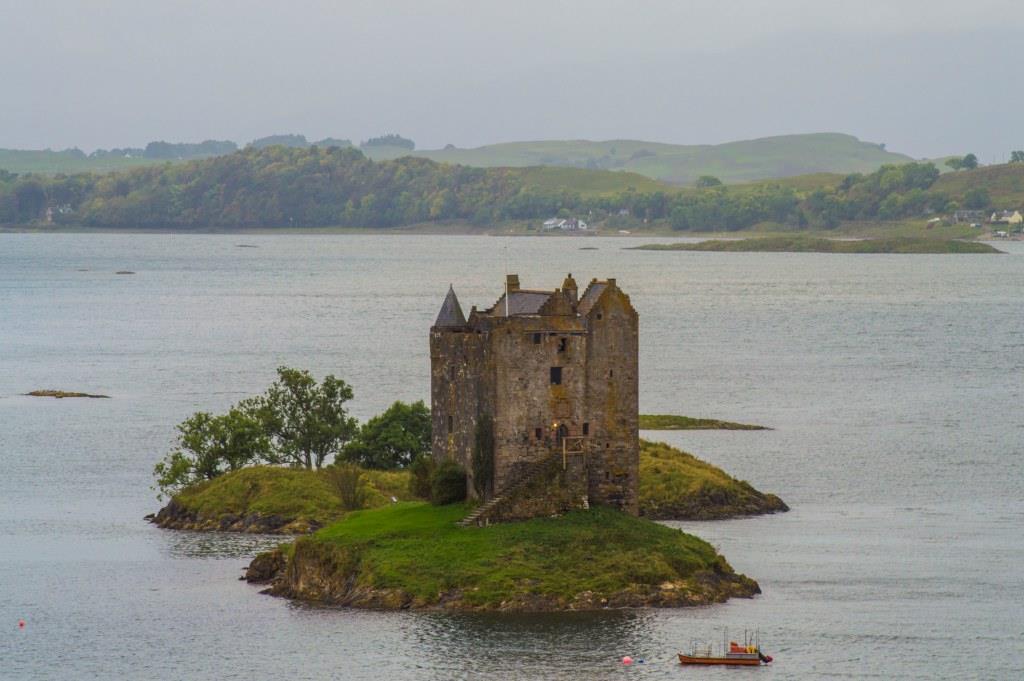 Castle Stalker is a commonly photographed castle on an island in Loch Linnhe, a few miles to the north of Oban. The island is in the middle of a shallow bay called Loch Laich, and is only accessible by boat; usually a distance of about 100m separates the island from the shore. The castle is a small, well-preserved tower house which originally had an associated courtyard, although little of this remains.

The lands around Castle Stalker were occupied by the MacDougall clan in the 13th century, but during the Wars of Independence they were opponents of Robert the Bruce, and after 1308 they lost a considerable portion of their authority and estates. When the last of the MacDougall line died leaving two daughters, they were both married to sons of Sir Robert Stewart of Innermeath in Perthshire, and the Stewarts were created Lords of Lorne.

It is certain that the Stewarts built the first castle on Stalker Island, but the date is unknown. It is believed to be sometime around 1540, but it is possible that an earlier tower existed here. After the lands of Lorn were granted to the Stewarts, one of the illegitimate sons of Lord Lorn was granted the lands of Appin, and the Stewarts of Appin were to hold Castle Stalker for many years, and were loyal servants – and distant cousins – of the Crown.

In around 1620 the castle passed to the Campbells, and in 1689 it was briefly retaken by the Stewarts of Appin when they rose in support of the Jacobite rebellion of that year. It was besieged by the Campbells for several months before it was surrendered. In 1745 the Stewarts attempted to take Castle Stalker again, but the garrison of 59 troops were able to resist their cannon, which were too small to breach the castle walls. The castle was occupied by the Campbells until about 1800, after which it was retained as a storehouse. The roof fell in (or was removed) about 1840, and the castle was abandoned. Castle Stalker has since been restored, and guided tours are possible. Booking is advised as the spaces are limited.