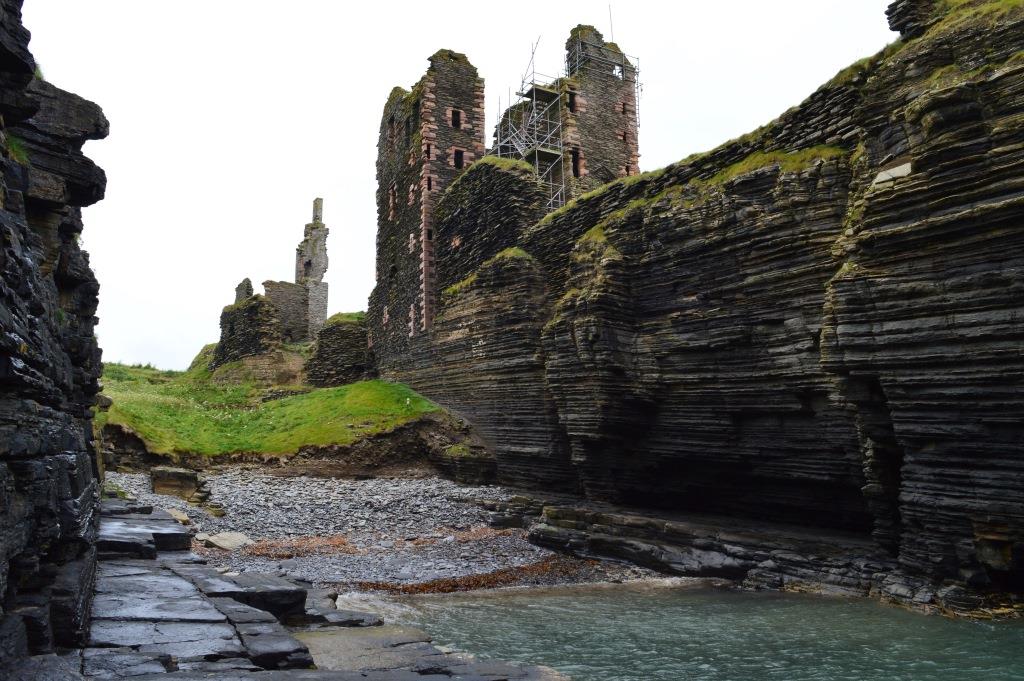 Castle Sinclair is a dramatically situated ruined castle on a headland to the north of Wick. It was the residence of the Sinclair Earls of Caithness, and is currently under restoration, with perhaps half of the castle (the outer ward) open to the public. To reach the castle involves a walk of about half a mile, and there are no facilities on site.

The castle – called Girnigoe Castle at this stage – originally consisted of a tower-keep with a courtyard occupying the whole of the peninsular, and separated from the mainland by a rock cut ditch. This section of the castle is not yet open to the public, and a significant proportion of the courtyard buildings are footings hidden beneath the turf. This castle was extended in the late 15th and early 16th centuries with a second courtyard added to the south-west. It is this section that is currently open to the public. Under the 4th Earl of Caithness, the whole castle was reconstructed to form a lavish palace, and the castle was renamed Castle Sinclair.

Caithness had been held by members of the Stewart family in the 14th century, but the last Stewart Earl was executed for treason and his title forfeited. William Sinclair, Earl of Orkney, exchanged the lands of Nithsdale in the borders for the estates of the Caithness Earldom with the King; then resigned the title Earl of Orkney and all associated lands to the King in return for the title Earl of Caithness and the castle of Ravenscraig in Fife. It was William’s son, William the 2nd Earl who built the earliest parts of Castle Girnigoe, although there may have been an earlier fortification here.

The castle was garrisoned by Cromwell in the 1650s, and in 1676 when the 6th Earl died without issue, his debts were so high that Campbell of Glenorchy claimed his estates and title. In 1679 George Sinclair of Keiss, claiming the estates and castle stormed Castle Sinclair. In 1680 Campbell arrived with 800 men and met Keiss and 500 Sinclairs near Wick; the Campbells won the day in a bloody battle. In 1690 Keiss returned to Castle Sinclair with cannon and blasted it into ruins, determined that the Campbells would not occupy what he saw as the family seat. The castle was never reoocupied.