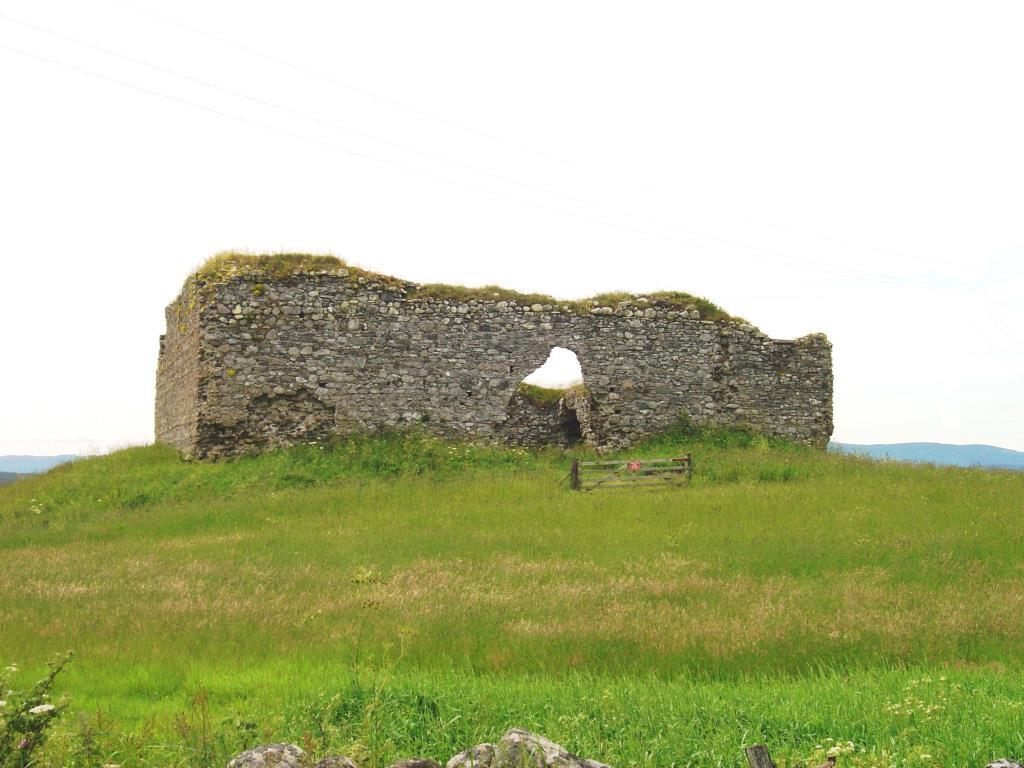 Castle Roy is a simple rectangular castle built upon a natural mound serving as a motte on the outskirts of Nethy Bridge in Strathspey. The position is strategically important guarding the southern side of the valley, and just downstream of the junction of the River Nethy with the Spey. It probably dates to the 12th or early 13th century, and is now owned by a charitable trust who are undertaking works to stabilise it. It is clearly visible from the road, but access is not possible when construction work is under way.

The castle was the seat of the Lordship of Abernethy which was one of a number of marcher-style lordships created by King Alexander II as a concerted effort to isolate the rebel MacWilliams; comparable lordships being created for the families of the Earls of Fife and Strathearn in and around upland Moray. Abernethy was created by 1226 and granted to James, illegitimate brother of Earl Duncan of Mar, and it seems very likely that James was responsible for the erection of the little castle as his seat. It is traditionally said that upon the death of James, Walter Comyn of Badenoch was granted Abernethy as an extension to his remit. If so, with the downfall of the Comyns at the hands of Robert Bruce, it is likely that Castle Roy was sacked and left derelict, but when Thomas Randolph was created Earl of Moray by Bruce, he was not granted Abernethy, which was in the hands of a member of the Comyn family in 1381, although a reference to Cristin McCrath in the Moray Register reveals that in 1296 it had passed to Christina of Garmoran, widow of the then Earl of Mar. It is likely that Abernethy was claimed by the Crown after the death of her nephew in 1346. In 1381 a John Comyn (otherwise unknown) resigned the lands to the Crown – and it is likely this is the reason the Comyns are held to have been the builders of the castle. John may actually have been one of the sons of Richard Comyn of Altyre, the royal forester.

By this date, Alexander Stewart, son of King Robert II had been made Lord of Badenoch, and the resignation resulted in his gaining Abernethy, which may have been granted to one of his sons. In the mid 15th century, after the death of his son Alexander, (incidentally also Earl of Mar!) and perhaps in response to raids by the Macdonalds the walls of Castle Roy were heightened. If so it was probably on royal instruction as Abernethy was not granted to Alexander Earl of Huntly when he was granted Badenoch. In 1501 the Lordship of Abernethy was granted by James IV to his illegitimate son who he also made Earl of Moray. Moray died in 1544 and it may be that when George Gordon, Earl of Huntly was granted the Earldom of Moray in 1549 that he also received Abernethy, and retained it when Queen Mary removed Moray from him in favour of her half brother in 1560. (The later title of Lord Abernethy held by the Earls of Moray refers to Abernethy in Perthshire). The Gordons certainly retained Abernethy into the 17th century, subletting to the lairds of Grant, by which time Castle Roy was perhaps falling into disrepair, although the date of abandonment is unknown.

The work carried out at Castle Roy has shown that a square tower was erected in the north-west corner of the castle, and that ranges of buildings lined the courtyard, which had a single arched entrance. It could be that the removal of the south-east corner was intended to create a second tower, but if so it was never built. A latrine projected from the wall near the tower, and inside, some of the buildings were two storeys high, indicating a variety of domestic buildings were enclosed. Work is ongoing at Castle Roy and continues to improve our understanding of this very early stone castle.