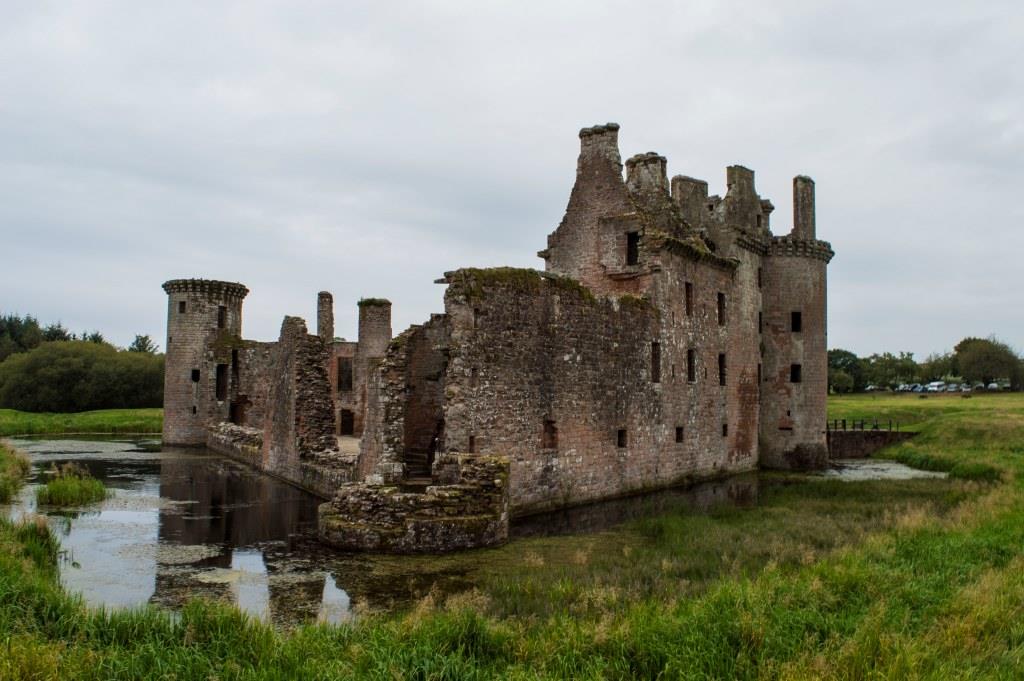 Caerlaverock Castle is a unique triangular castle within a moat which guards the western border of Scotland with England. Built by the Maxwell family, who were wardens of the West March, it was repeatedly attacked by the English, notably by Edward I in 1300.

The castle that is best known is actually the second Caerlaverock castle; the foundations of the earlier castle of the 1220s can be found along a signposted track to the south of the more famous main castle. It was a rectangular courtyard castle with square towers at three corners and buildings lining the inside of the castle. A hall-tower occupied the fourth corner. This castle had a fairly simple gate-tower, and was surrounded by quite a complex set of water defences including a harbour.

By 1270 the Maxwells had outgrown this little castle, and decided to erect a larger castle to the north. This castle was triangular in plan, with a large twin-towered gatehouse at one corner, and round towers at the other two corners. It was also surrounded by a broad wet moat. Within the walls were undoubtedly domestic buildings, but no trace of these early buildings survives; in addition to being besieged by the English in 1300 (and taken in two days), the Maxwell lord destroyed the castle in 1312 at Robert Bruce’s instruction.

A large new lodging was built within the castle in 1634, but it was not to be occupied for long; Covenanters dismantled parts of Caerlaverock Castle in 1640 after a 13 week siege and was left to the elements. Today it is managed by Historic Scotland and is open to the public.