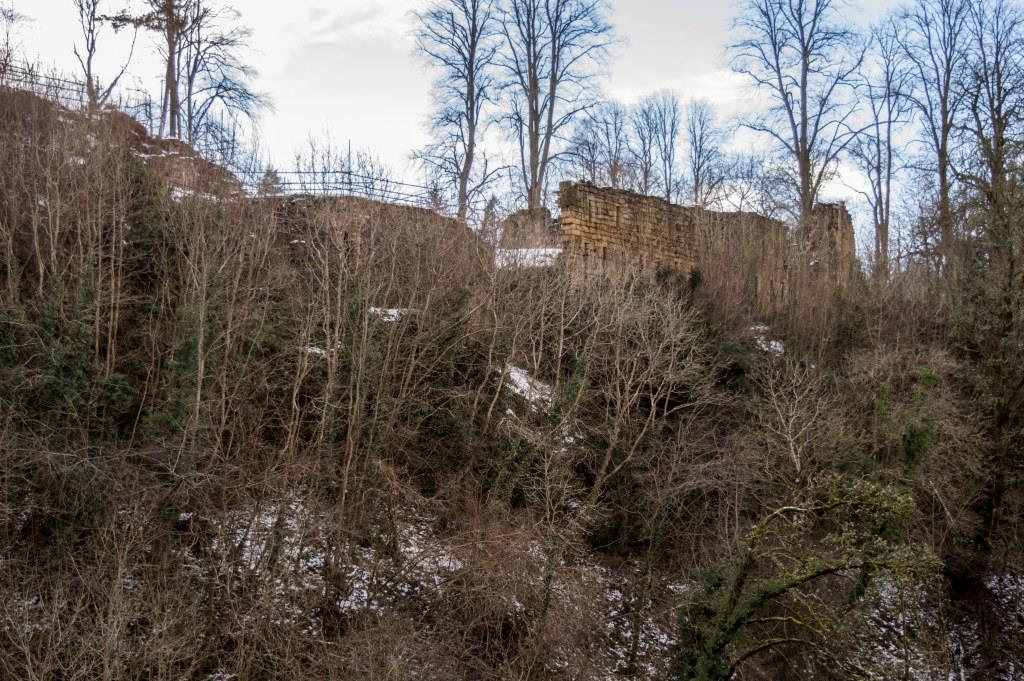 Cadzow Castle is built on the top of a cliff overlooking the Avon Water, a tributary of the Clyde, in the enormous Chatelherault Country Park to the south-east of Hamilton. It is currently undergoing stabilisation and is not accessible to the public, although it is possible to view parts of the castle through the safety fencing.

The castle consists of two walled courtyards, surrounded by and separated by a ditch. The outermost is roughly rectangular, with a small projecting square portion. It contains a number of vaulted basement chambers and footings which suggest that the courtyard was mostly occupied by residential buildings, with a drawbridge crossing the ditch to the east. This may have led via a gatehouse to the rectangular inner ward, but landscaping works carried out after the castle was slighted have obscured this. Within the inner courtyard was a large tower house, later extended with a wing. Again the exact layout is unclear due to the infilling of the courtyard area. The site overlooks a bend in the river, and the area seems to have been suurounded by a curving ditch which is 1.5 metres at its deepest, up to 10 metres wide, and is usually assumed to have been intended as a boundary ditch for a deer park rather than defensive.

Cadzow was originally a royal estate, but in 1222, half (including the castle) was granted to the Comyn family. Following their fall after the assumption of the throne by Robert Bruce, their portion was finally granted to the previously pro-English Walter de Hambledon, who joined the Bruce cause after the Battle of Bannockburn. The early castle may well have stood on the site of the house known as Castlehill (now demolished) which overlooked the Covan burn between Fergus Gardens and Barncluith Road today. It is possible that a new residence on the site of Cadzow Castle was started by James Hamilton, created 1st Lord Hamilton in 1445, after his ennoblement. His estates were to be centred around “The Orchard” and to be called Hamilton rather than Cadzow. However, it was only in the 1530s that his grandson Sir James Hamilton is known to have started work for the 2nd Earl of Arran on the site of the castle today.

The castle was occupied by Queen Mary after her escape from Lochleven in 1568, and was taken by the Earl of Lennox in 1570 after a two day siege. In 1579 it was again assaulted, this time by the Regent Mar, who dismantled it. The 3rd Earl was kept prisoner at this time, having gone insane, and was in no position to protest. The castle was not repaired and became part of the landscaped gardens of Hamilton Palace, built in 1695.