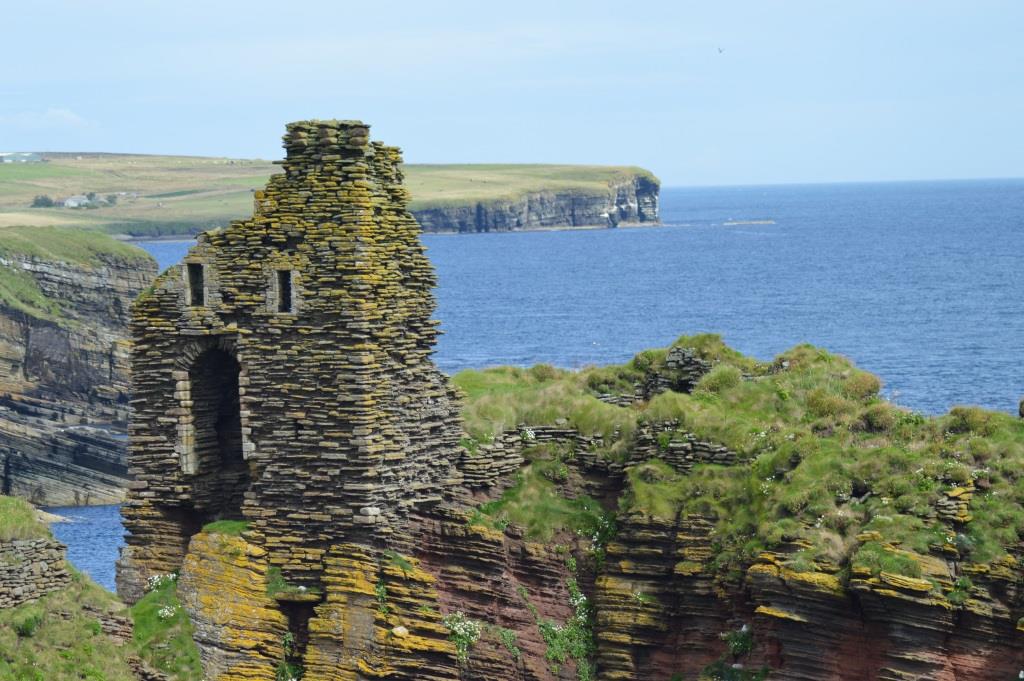 Bucholly Castle can be found on an isolated rocky stack called the Castle Geo, a few miles south of John o’Groats on the Caithness coast. The site is spectacular, but cannot be seen from the public roads, and requires a walk through fields which terminate at sheer drops over the cliffs. Access to the castle may be possible in dry weather, but is dangerous, and since none of the site is fenced, is not to be encouraged. A short distance to the north is sandy Freswick Bay, but the rest of the coast for some distance to the south is rocky cliffs, so no wider strategic reason for the castle to be at this site rather than anywhere else can be established.

The principal remains of the castle are those of the gatehouse, which is separated from the mainland by a narrow spit of cliff breached by what is probably a rock-cut ditch. This gatehouse has a single tower to the south, and a long narrow arched entrance passage – the northern side of this passage is actually curtain wall. Above this was a single chamber, with a second floor above. It is likely this was reached via a wooden bridge, probably incorporating a drawbridge of some description. Behind this is a narrow courtyard occupying most of the summit with ranges of buildings to east and west – the courtyard narrows to a point at its southern end, and is only walled on the shore-facing side unless the outer wall has fallen into the sea through erosion. The eastern (sea facing) range consists of five chambers, and survives as low walls only; those to the north are more eroded than the others, so that only three of these are obvious. The western range was almost certainly the principal residential range, with a square room to the rear of the gatehouse proving one half of the innermost section of the gate passage. To the south of this was a larger rectangular hall block which projected slightly into the courtyard, and to the south of this another rectangular room of smaller size. In addition a small square tower projected out to the west from the largest room. Again, most of this area only survives as low walls of up to 1.5 metres high at most, the tallest being the southern gable end of the large rectangular room.

The history of Bucholly Castle is obscure, not helped by a complete lack of documentary evidence about its origins. In local folklore it is associated with the unidentified fort of Lambaborg which was occupied in the 12th century by the Norseman Sweyn Asleifsson, but the association is far form certain. However we do know that the lands of Freswick were granted to the Mowat family by Robert Bruce, and that these lands included the Castle Geo. Between 1406 and 1413, William Mowat of Loscraggie, a member of the Mowat family of Balquholly in Aberdeenshire, now known as Hatton Castle, chartered his son John in the lands of Freswick and Ackergill. It was at about this time the Castle Geo – with an existing structure of uncertain age upon it – was refortified or strengthened with new buildings that would become known as Bucholly Castle after the old Aberdeenshire estate. John was killed in 1419, and the Mowats continue to appear in records during the 15th century, but as lairds of Loscraggie only. No mention is made of Bucholly under that name until 1548, when Patrick Mowat of Buchollie, also known as Patrick of Buchollie and Freswick, appears in charters. Prior to this date the castle was known as Freswick – the nearby tower house now known as Freswick had been built by the Sinclairs in the 1580s and was known as Burnside of Freswick.

It appears likely that the Mowat family ran into financial difficulty during the Civil War period – at least one member of the family was a dedicated royalist who died in 1645 at the Battle of Alford. Although there appear to have been numerous transfers of ownership within the family, the Mowats continued as lairds of Bucholly until the 1660s, when Freswick passed to the Sinclairs of Latheron. At no point is there any indication that the castle was attacked or destroyed, even by the the violent and unpredictable Sinclair Earls of Caithness, and it is normally assumed that after the acquisition of the Freswick estate by the Sinclairs, Bucholly Castle was abandoned. This may indeed be the case since the tower house at Burnside of Freswick was greatly enlarged in 1661-62, but there are no records to tell of its fate – perhaps it was used as a quarry for building materials to enlarge the Burnside tower. It is today one of the most picturesque ruins in Scotland.