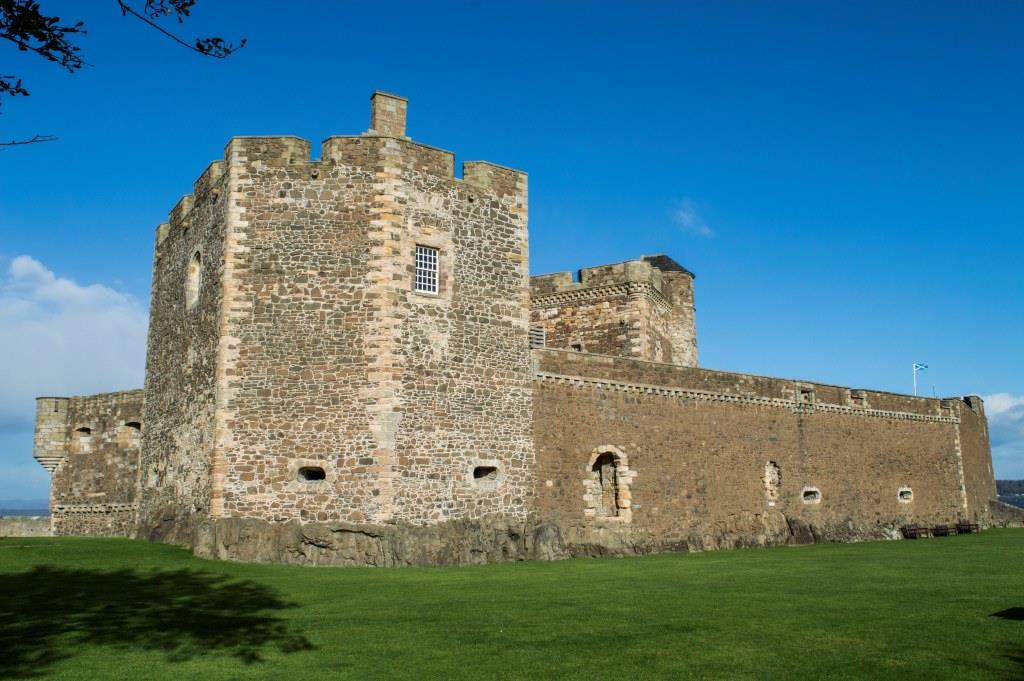 Blackness Castle is a curious boat-shaped castle occupying a spit of land jutting into the Firth of Forth a short distance west of Edinburgh. To the landward side are the main residential buildings, greatly strengthened to resist artillery, and in the centre of the courtyard is a square tower. The whole area is enclosed within low walls which reflect the continuing use of the castle until the early 20th century as a storage base for the military.

The castle was probably built in the early 15th century by Sir George Crichton, Admiral of Scotland, and consisted of the lightly defended courtyard with the tall tower in the centre. The castle was surrounded by a ditch, and the entrance through the wall (visible in the photo) would have been reached via a wooden bridge across the ditch. Facing the sea was a second, triangular tower.

The castle was acquired by the Crown with the forceful policies of James II during his destruction of the Black Douglases. Although political rivals, the Crichtons were also related to the Douglases, and it may be that the King was suspicious of them. Whatever the truth of this, buy 1454 the King had himself named as heir, and despite the defence of Blackness by the dispossessed James Crichton, it was all in vain.

Blackness Castle was strengthened under the eye of James Hamilton of Finnart, including the massive reinforcement of the east curtain wall and the external wall of the southern tower, which acted as a secondary source of accommodation and contained the Great Hall, and heavy artillery defences. The southern tower was also heightened. Work was completed in the reign of Queen Mary, but the new defences were still incapable of frustrating Cromwell’s English guns, which breached the walls in 1651. It was repaired after the Restoration of Charles II in 1660, and remained in active service as well as being used as a state prison until 1707. The castle was kept in repair and garrisoned until the late 19th century, and was briefly reoccupied during each of the World Wars, but is now open to the public and under the management of Historic Scotland.