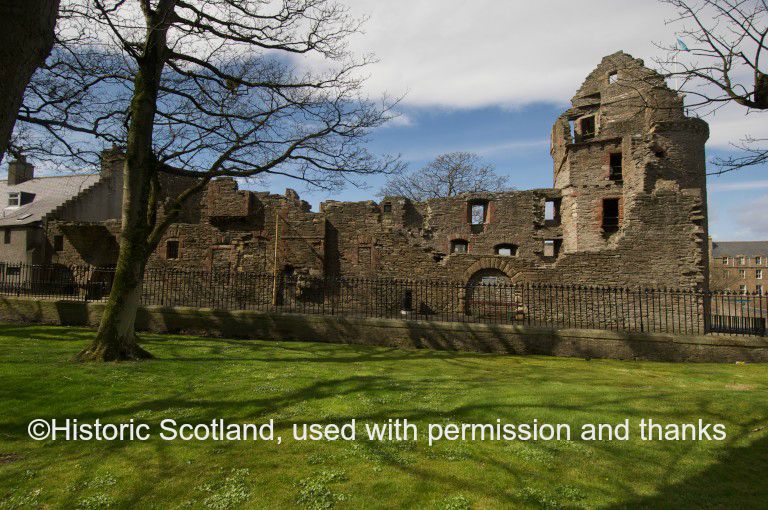 The Bishops Palace in Kirkwall was a large 12th century hall-house of three storeys and an attic, possibly erected by Bishop Wiliam the Old at the same time St Magnus’ Cathedral was founded. It was extended in the 1540s by Robert Reid, who was also Abbot of Kinloss in Moray, with a large drum tower, and again in about 1600 by Patrick Stewart.

The Palace was, up until the 16th century, unfortified and largely peaceful. After the death of King Haakon here in 1263 after the Battle of Largs, it appears likely that the Palace was neglected and fell into disrepair, with the various Bishops choosing to live elsewhere. Up until 1469, Orkney was not considered part of Scotland but paid its allegiance to the King of Norway, and in 1472 the Bishopric became Scottish with the creation of the Archbishopric of St Andrews.

One would expect that once Orkney became Scottish, the Bishops would have repaired and renewed the Palace at Kirkwall, but there is no evidence of this happening, and it is likely that the Bishops did not spend much time actually in Kirkwall, being trusted envoys of the Crown. It was not until the Reformation, when the lands of the Bishopric were gained by an illegitimate son of King James V, that attention was paid to the decaying buildings. Robert Stewart was then created Earl of Orkney in 1581, and his son inherited the title and lands in 1593. In addition to remodelling the Bishops Palace, Patrick built the Earl’s Palace in Kirkwall, before rebelling in 1614. He was hanged for his treason the following year along with his illegitimate son Robert, who had held the Palace against the King for a brief while in 1615, and the Bishop’s Palace was returned to the care of the Bishops until 1688.

Today the Bishops Palace in Kirkwall is maintained by Historic Scotland, and is open for a fee along with the adjacent Earls Palace. St Magnus’ Cathedral has been restored and is now used as a place of worship again. It is also open to the public for visits as a functioning Cathedral church.