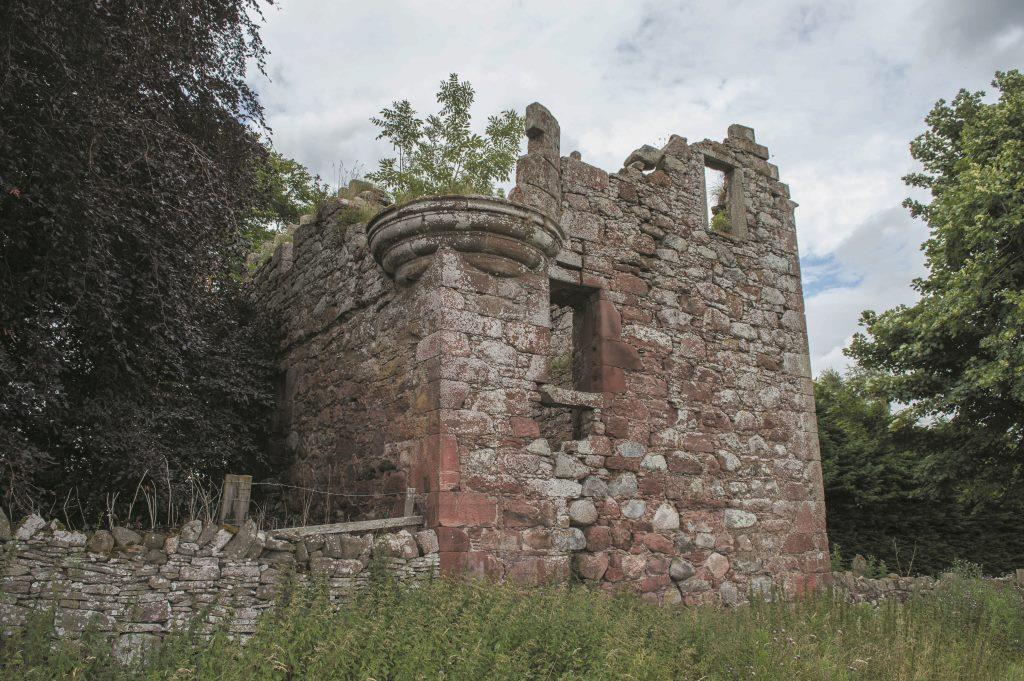 Ballinshoe Tower is a small tower just off a minor road between Kirriemuir and Forfar in Angus. It is partway up a gentle hill and overlooks a wide swathe of fertile farming land. The tower is roofless and fenced off for safety reasons.

The tower is a single rectangular building of two storeys and an attic, with a round turret in one corner, but plans drawn up in the 19th century show that in the corner opposing the turret was a round tower – which presumably contained the entrance doorway and staircase linking the three floors. Each floor appears to have been of a single room only, each possessed of a single fireplace. Beneath some of the windows are shotholes, placing the structure to the 16th or 17th century. The main building measures 8.3 metres by 6.6 metres, and shows no indication of decoration beyond the corbelling of the turret.

Ballinshoe was a property held by the Lindsays of Crawford, who sold it in 1539 to Elizabeth Lindsay and her son John Lyon, possibly associated with Glamis. However it appears to have returned to the Lindsays, since in the mid 17th century it was held by John Lindsay (II) of Woodwray, who left Britain to fight in the wars of Gustavus Adolphus of Sweden. Woodwray appears to have left no heirs, and the estate reverted to Ludovic, Earl of Crawford by 1639. The Earl’s sister Elizabeth was married to Robert Fletcher, and in that year Earl Ludovic issued a charter in their favour of the lands of Ballinshoe. The estate remained with the Fletchers until 1799 when the 7th laird sold off his estates immediately upon inheriting them. In 1814 they were sold by a family called Wedderburn to Magnus Meason of Lindertis, who in turn sold the lands to the Strathmore Estate (Glamis Castle) – although repeatedly said to have been part of the Glamis estate, this link is comparatively recent. Examination of the Pont map shows that a substantial Z-plan tower house and courtyard stood at Easter Ballinshoe, with a smaller settlement at Wester Ballinshoe. By the time of Roys map the Easter property had vanished and only “Wester Banshea” is shown – in a position approximating to the later farm. It therefore seems possible that the tower at Ballinshoe is a remnant of the much more impressive tower house of Easter Ballinshoe, a property of the Lindsays,  which disappeared in the 17th or early 18th century, subsequently redesigned into a modest tower, and the main house of the estate relocated to the site of the modern farm. The most likely source of destruction would be the Covenanting wars or Jacobite revolts, but in the absence of information about the allegiance of the Fletchers, the fate of the castle is unclear. Ludovic Lindsay was a Royalist and was forfeited by parliament, and Robert Fletcher of Ballinshoe was a Jacobite in 1715, so we might assume a consistent support for the Stewarts by the Fletcher family, but their input does not appear to have been important enough to record, leaving us with this little tower as a mystery!