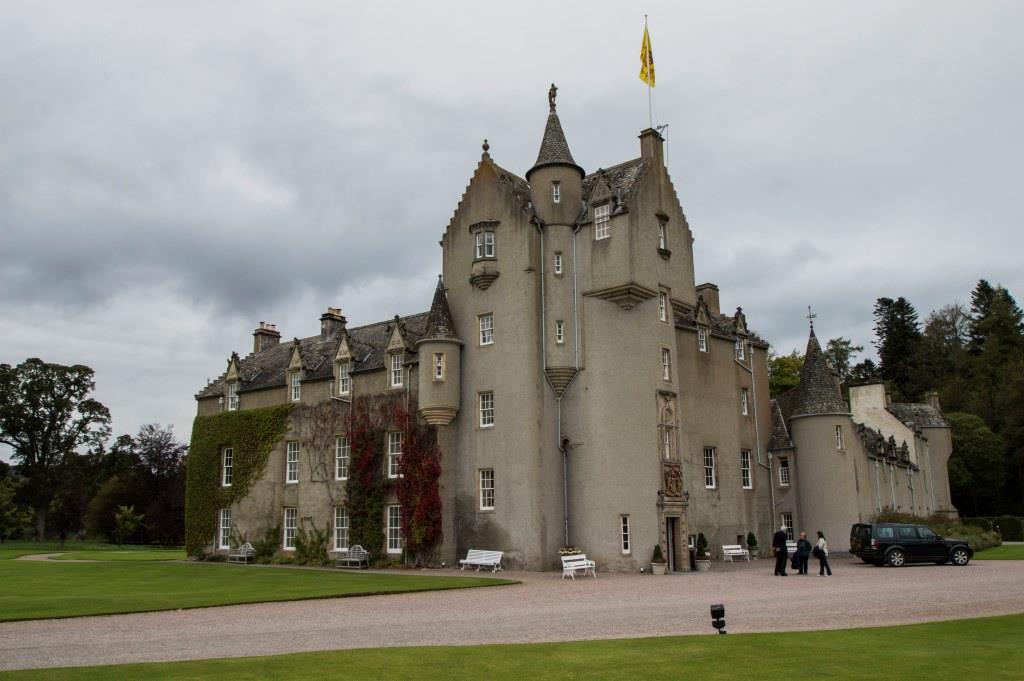 Ballindalloch Castle is one of the hidden gems of Speyside, and occupies low-lying land on the east bank of the River Avon. The location does not appear to have been chosen for defence, but could easily have been very marshy at the time of construction. It is an extended tower house of unusual plan built in the 16th century by the Grant family, and still occupied by the MacPherson-Grants today. It is open to the public seasonally.

The lands of Ballindalloch lie at the northernmost end of the strategically important Lordship of Strathavon, held by the Earls of Fife in the 12th century and seemingly still held by the Earl of Atholl, a descendant, in 1312. In 1389 they were surrendered to the Crown, and granted to Alexander Stewart, the infamous Wolf of Badenoch. Held by descendants of Buchan until 1490, in that year Strathavon was granted to the Earl of Huntly along with the Lordship of Badenoch. Two years later Huntly exchanged some lands with the laird of Freuchies, and it seems likely these included the lands of Ballindalloch. In 1498, a royal charter confirmed the grant of Ballindalloch to Freuchies.

By 1520 the lands were being managed by Patrick, brother of John Grant, and in 1539 their sons made an arrangement confirming that Ballindalloch was to be the property of Patrick’s son John. A lintel in one of the castle bedrooms bears the date 1546, indicating that the castle was probably built soon after John became the first laird of Ballindalloch.

The castle that he built was made up of a central hall block, with two vaulted cellars, and two round towers at diagonally opposed corners; the traditional Z-plan. In 1602 a third tower was then built midway along one of the sides of the hall. This contains the main staircase serving all floors. The first floor contained the great hall and upper floors several chambers. The castle was probably provided with a courtyard, but no trace of the walls survive. Perhaps at the same time as the third tower, a residential wing was added to the western end of the castle, with a small rectangular tower containing a second stair. In the 18th century a second residential wing was added on the eastern side, making a U-shaped mansion, and in the 19th century the castle was extensively remodelled, the plain old features being made altogether more Baronial, including the fantastic main entrance tower and hallway, as well as the large courtyard of buildings added to the east.

The lairds of Ballindalloch were involved in many local disputes; with other members of the Grant family who were pre-eminent in Strathspey as well as the Gordons, and by association were involved in the bitter feud between the Earls of Moray and Huntly. Ballindalloch Castle was besieged and taken by the Earl of Huntly in 1590, and wasted by his order in 1592. Unsurprisingly, at the Battle of Glenlivet in 1594, the Grants fought against the outlawed Earl of Huntly. Perhaps the reason for the 1602 building works was partly damage caused by the attack in 1590. In 1645, the castle was “put to the flames” by the Royalist Montrose because of the support of the Grants for the Covenant, and may have been occupied by English forces after 1650.

By 1682 the estate was in financial trouble, and the new laird had to promise to settle debts in order to gain possession of his inheritance. Perhaps hoping for debt relief, John Grant of Ballindalloch was one of those to support the Jacobites in 1689. By 1690 his plan had backfired as troops of the laird of Grant (his chief) were occupying Ballindalloch against him. Soon afterwards he was forfeited. In 1711 Ballindalloch passed by consent to William Grant of Rothiemurchus, who was able to deal with the debt problems, and was not inclined towards Jacobitism. It was William who most likely added the second wing to the castle.

The estate passed to a grand-nephew, George MacPherson, in 1806, who adopted the name MacPherson-Grant, and his grandson carried out the extensive reworking of the castle in 1853-78. Some of these extensions were demolished in the second half of the 20th century. The castle remains the family home of the MacPherson-Grants, and not all of it is open to the public, but the public rooms give an excellent view of the older parts of the castle, and it is very worthwhile visiting.