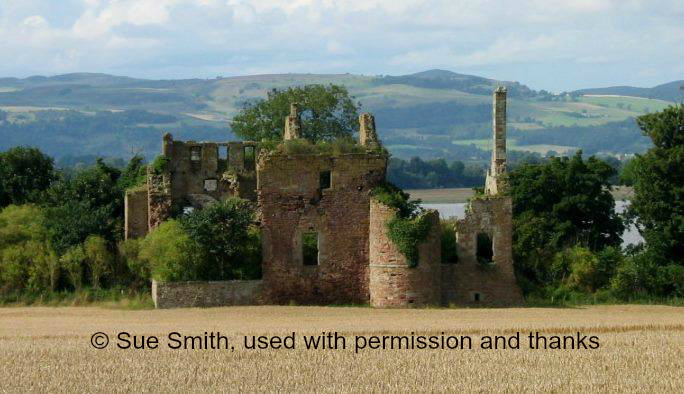 The ruins of Ballinbreich Castle are on the southern bank of the Tay estuary a short distance downstream of Newburgh. The lands were held as part of the Barony of Abernethy by the Abernethy family in the 12th century, but passed with marriage to Sir Andrew Leslie in the time of Robert the Bruce.

The castle was originally built as a rectangular keep with courtyard in the 14th century, meaning that the earliest phase of construction was soon after the Leslies had acquired the estate. Major changes took place in the early 16th century and again in 1572, by which time three sides of the courtyard had a range of buildings attached. A new courtyard entrance was also constructed, defended by a round tower.

The Leslies became Earls of Rothes in Moray in 1457, and they may have built a further castle of Ballinbreich in their Moray lands. However as early as 1513 the estate was of secondary importance to the Earls, parts of it being sold without royal permission, and in 1600 the northern Ballinbreich had also become a barony and passed to the Grants, making records somewhat confusing. When the 6th Earl was made the first (and only) Duke of Rothes in 1667, one of his secondary titles was Marquis of Ballinbreich. It isn’t clear which Ballinbreich is referred to.

In 1763, the family seat in Fife Leslie House burned down, and in order to fund repairs the Earl of Rothes sold Ballinbreich in Fife to Sir Lawrence Dundas for £20,000. Dundas recouped his money by selling timber from the estate to that value, and his descendants, who gained a title in Shetland, chose not to live in the castle, which was allowed to become derelict and the masonry plundered for other buildings. The overgrown condition of the castle suggests it is not open to the public and may be dangerous.