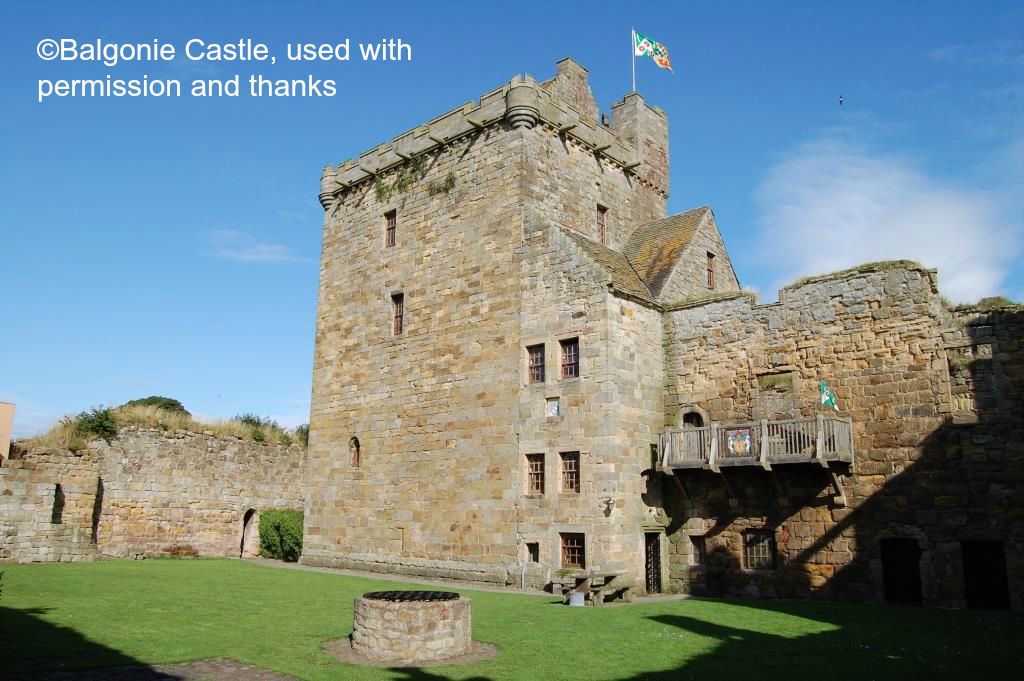 Balgonie Castle is a 14th century tower-keep and later courtyard built on a river cliff overlooking the River Leven a short distance east of Glenrothes in Fife. It is privately owned and has been partially restored, and is open to visitors by appointment. Balgonie has a special place in my heart because it was where my wife and I were married in 2006.

The estate of Balgonie was held by the Sibbald family from the 13th century, and although they may have had an earlier castle on the site, the oldest part of what stands today – the tower-keep – dates from the late 14th century, and was built for Sir Thomas Sibbald, the royal Treasurer. The last Sibbald laird, Sir Andrew, was sheriff of Fife twice, and left his estate and castle to his daughter Helen, who was married to Robert Lundin/Lundie. Their son Sir Robert was another Treasurer, and he extended the castle with a new range of buildings in about 1496. Originally this range, containing the chapel, was connected to the tower by a bridge. By this time, the courtyard wall had also been erected along with the gatehouse.

The Lundie family sold Balgonie Castle in 1623 to two brothers of the Boswells, and it was sold by their creditors in 1635 by Sir Alexander Leslie, who was to become a famous Covenanting general, and was made Lord Balgonie & Earl of Leven in 1641. The gap between the north block and the tower was filled in with a great staircase in 1666, built for his son. In 1716, Balgonie was captured and plundered by Rob Roy MacGregor with a band of 200 men, and in 1824 the castle and estate were sold by the 8th Earl to Sir James Balfour of Whittinghame. By the 1840s the castle was roofless – removed deliberately to avoid paying the Roof Tax – and left to decay.

The castle was taken on by David Maxwell from Edinburgh in 1971, and he restored the tower-keep before selling Balgonie to its current owner, Raymond Morris of Balgonie and Eddergoll in 1985. The Morris family have further restored the castle, starting with the north block, and plan to continue the restoration. It remains the private home of the laird and his family, but the chapel and hall are available for hire for weddings and private functions. I can heartily recommend it!