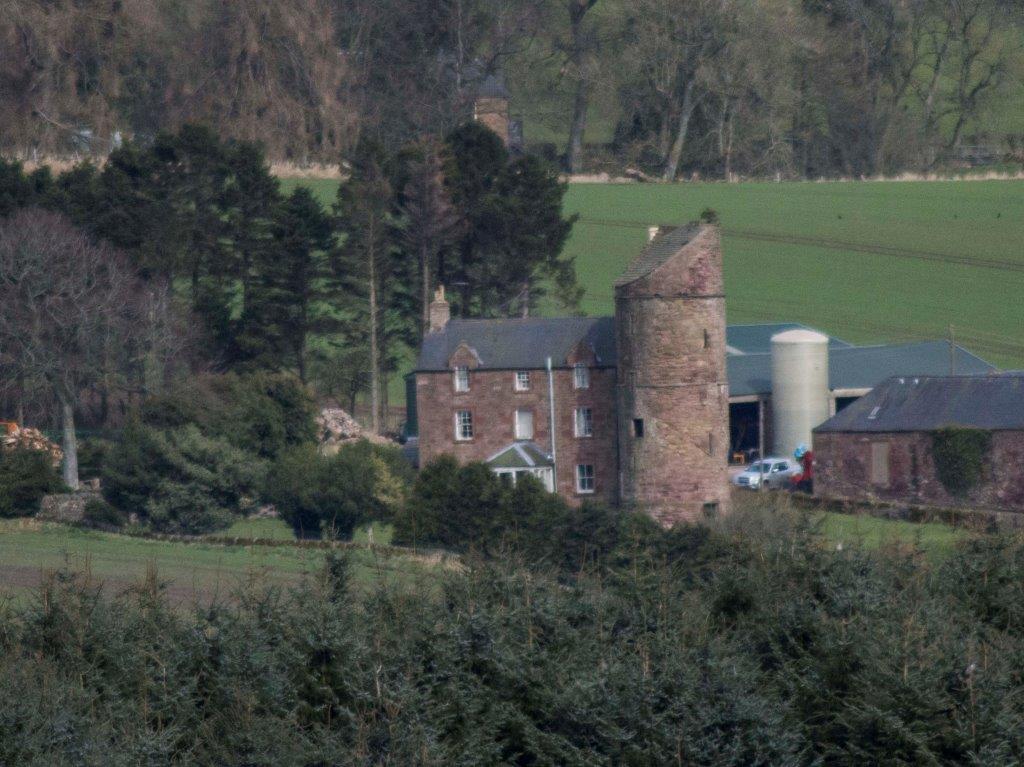 Balfour Castle was a modest tower house which was built on a slope a few miles to the west of Kirriemuir. The site guards a pass between two lengthy ridges and overlooks the Cromie Burn, which flows westwards into the Melgum Water and then the River Isla. Strategically the site is of very local importance, and is not strong defensively, which is fairly typical of Scottish tower houses, and indicative that no castle stood on the site previously.

All that remains of the castle is a single round tower with a sloping roof, which has been incorporated into a later farmhouse. The tower is six storeys and almost 20 metres tall, which is unusually high, and surviving parts of masonry from the demolished section of the castle indicates that the adjoining walls were up to 2.5 metres thick. Decorative strings can be seen around the tower – as well as on the adjacent wall to the north-east, indicating that Balfour was a tower house, and no as has been suggested an earlier courtyard castle. The foundation of the east wall of the main block of the castle could be traced for about 10 metres in the nineteenth century, the thickness suggesting that an early 16th century date is possible. The basement is vaulted and is provided with wide shot-holes, the upper windows are small slits. Unfortunately the two images from the late 16th century are one picture of a skeletal tower with battlements, and another which is confused with other writing, meaning we cannot get a clear indication of what the castle looked like at this time. However, the presence of battlements on the skeletal outline may indicate it was originally a more warlike building than we might expect from what is left today.

Balfour was an estate which was held by Sir Alan Durward in 1253 when he granted it to the Abbey of Arbroath, and was occupied by the Ogilvies from at least 1478. It is likely that the earliest castle on this site was built by the Ogilvies of Airlie, although it used to be believed that Cardinal David Beaton (also Abbot of Arbroath) erected it for his wife Marion Ogilvie some time later. (He was forced to separate from her to continue his church career). In 1539 Beaton issued a charter to James Ogilvie granting him Balfour (the earliest charter relating to it) and the estate remained in the hands of his successors into the 19th century, appearing to have avoided being sacked during the various troubles of the intervening centuries. When the estate was sold in 1798 to a member of the Farquharson family no mention is made of the castle, and it is not named on Roy’s map, which only shows the Kirktown of Kingoldrum with the castle and estate to the south. Overall the history of this castle is very obscure, and as part of a private residence today, it is not accessible to the public save from the adjacent road.