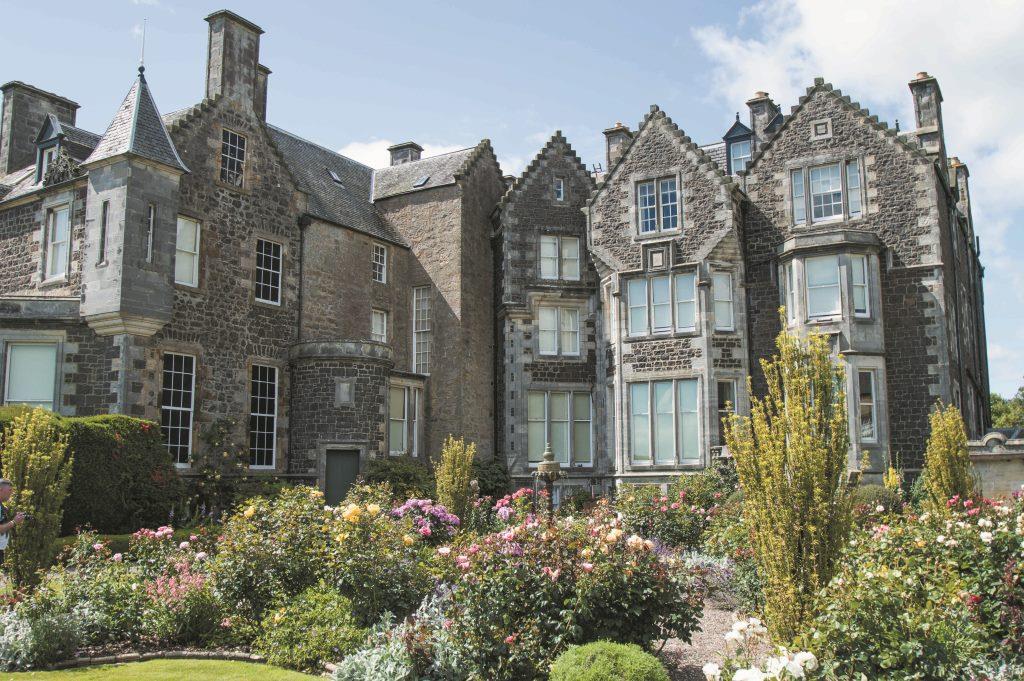 Balcarres House is a large mansion house within private grounds on a south facing slope about half a mile north of Colinsburgh in the East Neuk of Fife. There does not appear to be any significant strategic reason to site a fortified dwelling here, and the location has no obvious defensive qualities, although the ground immediately to the north is a flatter area and may have been marshy at one point. Overall the building appears to have been constructed without defence being a particularly strong factor.

At the centre of the mainly 19th century mansion house is a tower house of the 16th century which appears to have been built on the Z-plan. There are no extant plans of the house in the public domain as it has remained the private home of the Lindsay family since its construction. All that can be established is that the great hall occupied the whole of the first floor, and that the basement was vaulted. The house was extended significantly in 1840, when the south-west wing was added, and again in 1864 when a considerable building was added to the north. These two extensions have almost completely enclosed the old tower house, (the sandy-coloured section) but it seems likely that the rounded entrance porch in the photograph hides the original entrance to the tower house, and that the narrow tower adjacent contained the stairs to the first floor.

This was built by the Lindsay family after John Lindsay purchased the lands of Balcarres in 1586. Prior to this, there does not appear to have been any significant dwelling at Balcarres, and indeed, its appearance in records is fairly sketchy. In 1526, the lands of Balcarres were granted by James V to George Douglas, and in 1584 they were held by James Borthwick. It seems likely that as Lindsay’s wife was the widow of David Borthwick of Lockhill, the property may have come to him by from an extended member of his wife’s family. It is to be assumed that, as the lands were within the parish of Kilconquhar, that they fell at an earlier date under the superiority of the Earls of Fife, and potentially the Dunbars, but there is no specific record relating to them. John Lindsay was the second son of David Lindsay, Earl of Edzell, and was a professor of law and divinity. He had been created Lord Menmuir in 1581, and was rector of Menmuir in Angus. Having purchased the lands of Balcarres and others, he built the tower house in 1595, but died in 1598. He was succeeded by his son John, who died young, and second son David in 1601. David was a staunch royalist during the Civil War, and had been created Lord Lindsay of Balcarres in 1633. He died in 1642, and was succeeded by his son Alexander. He followed the Covenanting cause, fighting at Marston Moor, but chose to try to ally with Charles I before his execution, fearful of Cromwell. Created Earl of Balcarres in 1651, he chose to live in exile at the court of the future Charles II, his wife acting as tutor to Prince William of Orange. In 1659 the earl died, and his eldest son died young in 1662, leaving Colin Lindsay, a ten year old child, to become the third earl. Although he knew William of Orange, he declined to abandon James VII & II, and went into a lengthy exile. When he returned, he chose to rebel in 1715 and was confined to Balcarres, where he died in 1722. He was also followed by his eldest, and then second son. James, the 5th earl, was an army officer serving abroad in 1745, and did not take part in the second Jacobite Rising. Throughout this period, there is no record that Balcarres was ever attacked or occupied by troops, and from the time of Earl James’ retirement from the army to his death in 1768, he concentrated on improving the estate.

Today, Balcarres House remains the private home of the Lindsay family, and is occasionally open through the Scotland’s Gardens scheme.