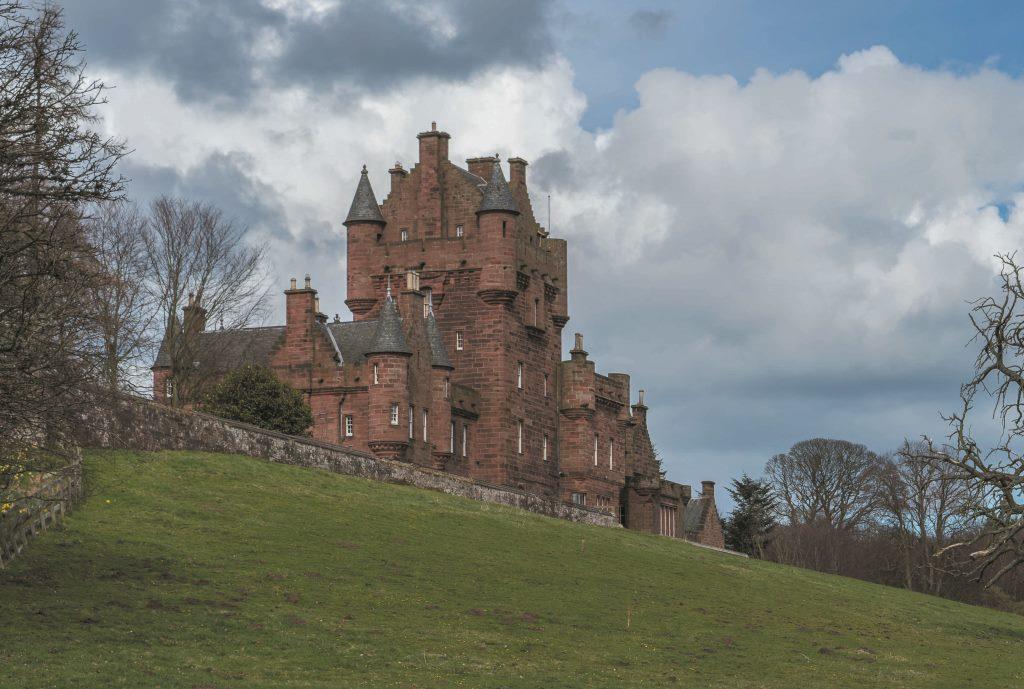 Ayton Castle is a large castellated mansion of the 19th century situated at the top of a steep slope overlooking the Eye water, which flows into the sea a few miles north. It is to be found within private grounds and cab be seen from public roads the other side of the river valley. Built in red sandstone to a Scottish Baronial design by James Gillespie Graham, Ayton is a private residence offering accommodation elsewhere within the estate.

It is usually stated that there was a castle at Ayton built by the de Vesci family, important landholders in Yorkshire and Northumberland. However there appears to be some confusion with the de Vescis and de Atons of West Ayton in Yorkshire, and it is notable that the earliest mentions of Ayton are with reference to Elias and Dolfin “de Eiton” in 1166 witnessing a charter of Waldeve, Earl of Dunbar. Waldeve was a member of one of the old Northumbrian dynasties predating the Norman Conquest, and it is notable that Dolfin was a name used by that family, so it appears quite possible that the lands of Ayton were held, not by the Norman de Vescis, but by the native Dunbar dynasty. There is a record which states the castle of Ayton was a tower built by the Home family – who are considered to have been an offshoot of the Dunbar Earls – which tends to suggest continuity of tenure from this period. However, there is no evidence at all to suggest that a castle was erected at Ayton at this early date – the earliest record is to it being destroyed by the English in 1448. Mentions of various landholders bearing the name de Ayton (or variants) continue in records through to the late 15th century, when the family heiress married George Home of Dunglass, who was granted most of the lands of Ayton in 1472.

By 1497, the old tower occupied by the Homes at Ayton had been repaired and reoccupied, as it was attacked by the Earl of Surrey, who “laid his ordinance to the castle, and continually beat it…in such ways that they within rendered up, the fortress, their lives only saved.” Surrey then sacked the place. A month later, Ayton church was the site of a meeting between English and Scots, and a truce was signed there as the prelude to the “Treaty of Perpetual Peace” of the following year. It is likely that the castle of Ayton was a small free-standing tower, perhaps with a courtyard, but the location and design of the castle is unknown. It is likely that after 1497 it was rebuilt, but the castle vanishes from history at this point. The Homes (or Humes, the name is interchangeable at this point) were heavily involved in cross-border warfare and so it seems unlikely they would not have maintained a tower at Ayton – but there is no evidence for it, and in early maps of this period no hint of a separate dwelling above the village is shown. In Blaeu’s Atlas of the 1650s an enclosed area to the east of the village appears to suggest that the estate had been formalised as a separate area, but there is no suggestion that a tower remained there – perhaps it had been destroyed. By the mid 18th century Roys map does show a clearly defined area to the NE of the village which must represent the castle estate, but there is no building of note centrally placed where we might expect to find it; the main building in this area seems to be opposite the church, on the site of the Garden Cottage, as it is now called. As this is on low lying ground, it cannot be the site of the earlier tower, which would have been sited with defence in mind. The Homes ceased to occupy Ayton after the 1715 rebellion, when their estates were forfeited.

The New Statistical Account of 1834 states that Ayton House, a classical mansion which burned down later the same year, was built on the rising ground presumed to be the site of the old castle. In 1851 the new mansion was built, and extended several times in the later 19th century. It can be assumed that the current buildings do stand on the site of the older mansion, which almost certainly postdates Roy’s map, and may have incorporated part of the old tower in its foundations. Today there is no trace of fortification around Ayton Castle, although it is undoubtedly a beautiful building.