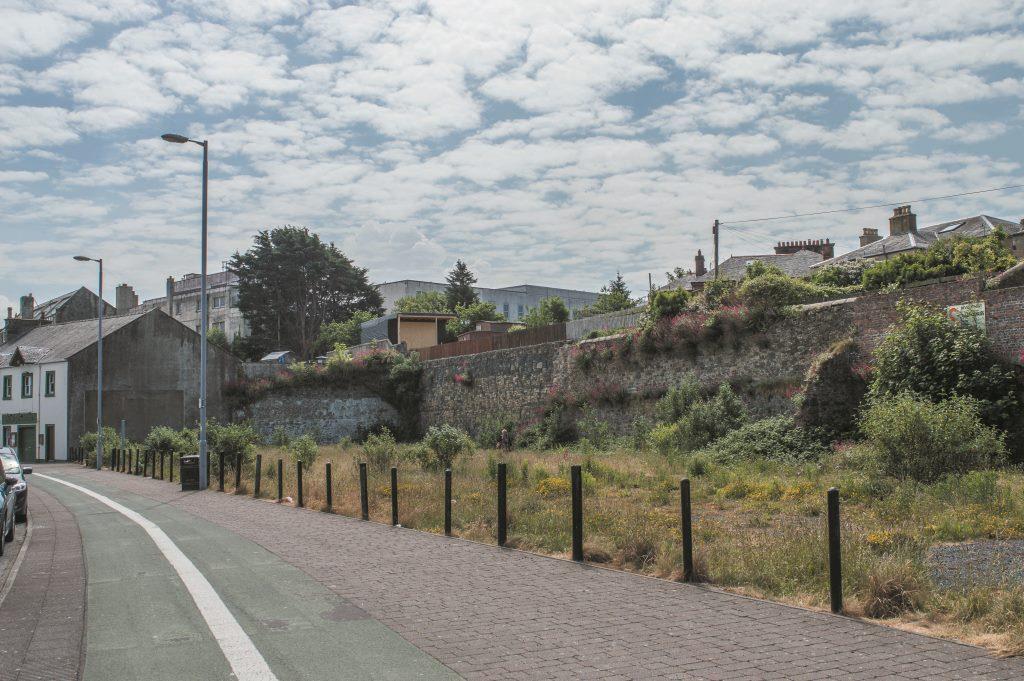 Ayr Castle occupied a piece of high ground which overlooked the mouth of the River Ayr and was on the southern bank. It stood to the SW of the junction of what are today known as Fort Street and Harbour Street. The site of the castle today lies within private gardens and the former site of the 17th century Citadel of Ayr founded by Cromwell, and there are no surviving remains of the medieval castle in the form of masonry or even comprehensible earthworks.

The earliest maps of Ayr suggest that like many of the early royal castles, Ayr Castle was in essence a large motte utilising the natural high ground, with a timber palisade surrounding a largish courtyard. Ordnance Survey mapping up to the 1930s shows an oval mound as the identified site of the old castle in the rear gardens of what is now 8 Montgomerie Terrace, but this is also the area which was once occupied by the north-east bastion of the 17th century fort, so it is quite possible that the site and any remains of the castle were completely destroyed by Cromwell’s men when the fort was built, and that the high ground depicted was actually a relic of the Citadel.

Ayr was actually a border town back in the 12th century. The royal writ to the south-west of the Clyde valley didn’t run that strongly, and the Lords of Galloway (although loosely and nominally owing their allegiance to the Kings of Scots) had considerably more independence than those kings were comfortable with. However they couldn’t really do a great deal about it. They had pretty able deputies in the Firth of Clyde in the Stewarts, and the advancing power of the Stewarts was seen as threatening the stability of the area rather than that of the Crown. In the reign of King William, during his captivity in England, the two sons of Fergus of Galloway fought a bitter civil war which resulted in the death of Uhtred at the hands of his half-brother Gille Brigte. Eventually a settlement was imposed upon Galloway by the efforts of King William and (to a lesser extent) Henry II of England, resulting in the partition of greater Galloway between the sons of Gille Brigte and Uhtred. Duncan, the son of Gille Brigte, was granted a wide swathe of land in the northern part of this territory, still to the south of Ayr, known as Carrick.

The exact date of this is unknown, but seems to have been in the 1190s. In about 1197, a new castle was created at the mouth of the River Ayr alongside an existing settlement that was refounded as a royal burgh by 1205. It appears likely this was in response to pressure building in the local area between the Stewarts and Duncan of Carrick, and as an assertion of King William’s overlordship. A sheriff of “Newcastle upon Ayr” was recorded as a witness on an undated document which was produced sometime in the first half of the 13th century, but otherwise we know virtually nothing of the early history of the castle and burgh. The castle remained in royal hands for the rest of its life, and although it is widely presumed that it would have been rebuilt in stone at some point prior to the Wars of Independence, this is not necessarily the case. The castle was perhaps a statement of intent by King William to the Stewarts and the Galloway scions as much as to the threatening Islesmen to the west. It was granted to the queen as a dowry property in the reign of Alexander II, and was a royal residence and collection point for dues owed to the Crown, both of which would be admirably covered by a timber castle. If it was redeveloped in stone, the chances are that it was a simple walled courtyard on the mound and little more.

It was still referred to as the New Castle on Ayr in documents of 1291-2, when Nicholas de Segrave was temporary keeper. In the Independence period, however, Ayr Castle had achieved a strategic significance beyond its original remit, and changed hands many times between the English and Scots. In 1297 Robert Bruce (the future king) was the keeper of Ayr, and is said to have razed it to the ground in the face of advancing English troops. This did not prevent its occupation by the English by 1300, and in 1302 Earl Patrick of Dunbar was its keeper. In the winter of 1303 Bruce was back as constable of the castle, and razed it again in 1306 after the murder of John Comyn, only for it to be garrisoned again by the English from later that year until 1310. A document of 1st June 1307 requests the supply of masons and carpenters to “repair the castle and houses” there.

The repeated destruction and reoccupation of the castle suggests that if it had been built in stone, either the extent of the destruction was exaggerated – or that the castle at the time must have looked like a building site for much of this time, with a mish-mash of defences. Following the fall of the castle in 1310 to the Scots, Ayr was the location of a parliament in 1312 (although the castle isn’t mentioned) and in July 1314 Roger Laybourne is described as “late constable” of Ayr Castle, suggesting that he may have been in occupation up to about the time of the Battle of Bannockburn but had left the area. There is after this date no mention of the castle in the documents of the English, suggesting that it may have fallen into a period of disuse during the reign of David II. The next references specifically to the castle seem to be those of the 16th century, when it was occupied by French soldiers after the death of James V.

This 250 year gap in the history of the castle suggests to me that it was not ever brought back into repair as a castle and royal residence, but that instead, perhaps during the reign of James V, but more likely at the instance of Marie de Guise, an artillery fort was erected to guard the harbour and town of Ayr against the growing hostility of the Henry VIII. If so, it is likely that any remains of the castle on the mound were lost at this time, and that the 16th century fort was then largely or completely destroyed by Cromwell. The citadel dates to 1652-1654 and was protected by walls about 3 metres thick and about 4.5 metres tall. Six sided, it had a bastion at each corner with a turret, and a substantial portion of these walls survive, along with large parts of the moat. It was large enough for a garrison in excess of a thousand. In 1663, Charles II granted the fort to the Earl of Eglinton with the status of a burgh, but he sold it to the town of Ayr in 1687. In 1727 the burgesses sold it back to the Countess of Eglinton, who tried to encourage use of the site for industry, but by the end of the 17th century it was already being used as a quarry. The illustration is not the best picture of the citadel walls, but was chosen to show the alleged site of the castle in the background.