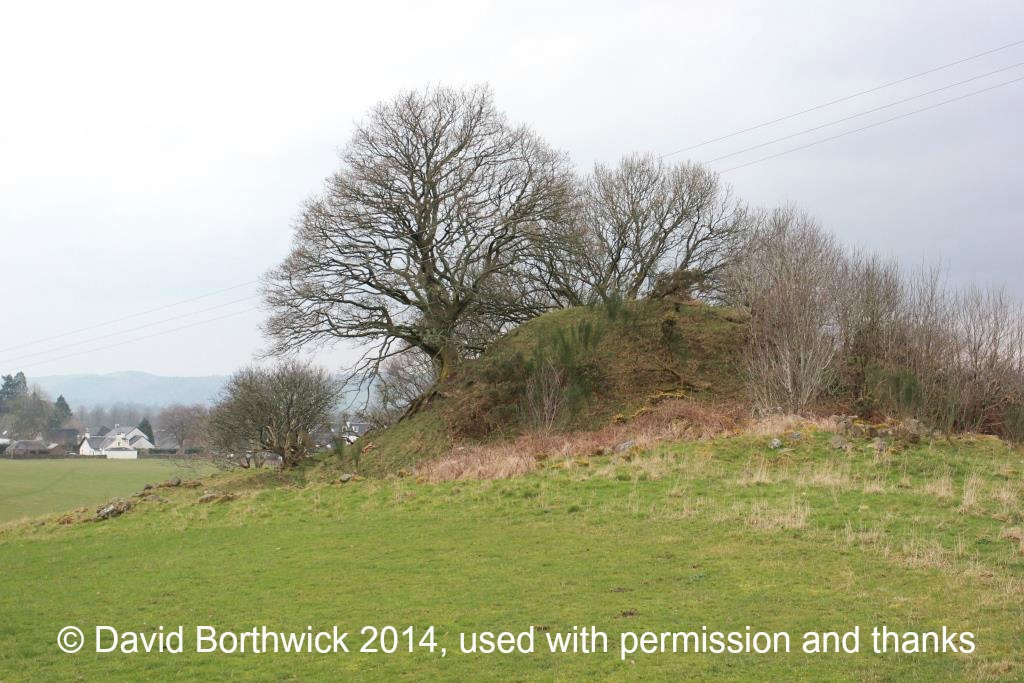 Auldton Mote is one of the few clear examples of a genuine motte and bailey castle in Scotland, and is situated to the north of the town of Moffat in the west march of the Scottish Borders. The site lies between two burns, the Birnock Water and the Crosslaw Burn, both tributaries of the River Annan. The site is one of a number of earthwork castles in the vicinity of a strategically vital invasion route into Scotland, and is situated on sloping ground which would have given good views over the low-lying area now occupied by the town towards Annandale.

The earthworks consist of a conical mound some 6 metres high with an oval summit about 10 metres across, a ditch surrounding this, and a counterscarp bank. The ditch then continues to the south and east of the mound, and together with the bank, enclose a kidney-shaped bailey measuring about 73 metres by 36. The south-western side of the motte has been damaged by a substantial trench which has been excavated into the body of the mound; a second smaller trench has been cut into the north-west side. In both cases the excavated soil has been dumped in a heap at the base of the motte. There is no evidence of any stone buildings at the site, which was presumably defended with a timber palisade and a wooden tower or hall on top of the motte. There is no causeway between the motte and the bailey, indicating a timber bridge led across the gap, and the bank and ditch do not survive in their entirety, as well as presumably suffering the effects of erosion and subsidence – originally the defences would have been more impressive.

The castle is modest in scale when compared to many south of the border with England, and presumably is to be considered one of the lesser defensive sites in Annandale, which was a vital lordship granted to the Bruces in 1124 by David I. The motte at Annan, for example, measured about 18 metres tall and the bailey at least 90 metres long – indicating that it was roughly three times the size of Auldton. It seems very likely that the castle was erected by the Bruces as part of their overall defence of Annandale; the earliest charter reference concerning Moffat itself was issued by the Bruces as part of Annandale. The next reference is in the reign of David II, which mentions lands of Netherholme and Aultonayle (?Auldton) as being granted to Robert Lage. By this point Annandale had been granted to the Randolphs, also earls of Moray, but soon afterwards fell under the domination of the English. The castle is too small to have acted as a serious obstacle to English invaders (or Edward Balliol) and perhaps had been destroyed during the early 14th century by the armies of Edward I – or Bruce himself. There is no evidence to suggest that it was reoccupied after this point, but unfortunately the castle has not been subject to modern archaeology, and no occupation dates or construction dates have been established.

Auldton Mote lies on agricultural land, so it is accessible to the public apart from when there are crops growing or livestock in the field.