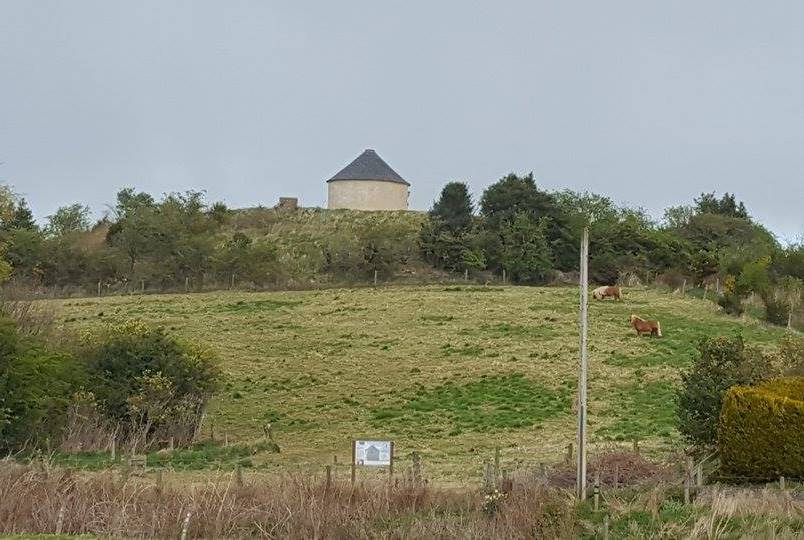 Auldearn Castle is probably better known for its prominent doocot rather than for being a castle. The earthworks of the castle occupy a site at the western end of the village of Auldearn, near Nairn, and overlook the Auldearn Burn, a stream which flows into the extensive drainage system to the north. The site does not appear to be strategically important or defensive, so the location of an early castle here is somewhat puzzling.

Key to understanding the location of Auldearn Castle is to understand the nature of the Moray Firth coast in between Inverness and Banff. A substantial part of the fertile low-lying Laich of Moray is founded – literally – on sand. Three substantial watercourses drain large amounts of water from the mountains into the sea – and they have been prone to flood massively, and change their courses radically in the process. These larger rivers – the Findhorn, Spey and Deveron – are accompanied by lesser rivers – the Lossie and Nairn, also prone to flooding and course change. An examination of the 25m contour line east of the River Nairn is revealing, as it shows that to the west of Auldearn is a wide bowl (now draining the Auldearn Burn), to the east is a narrower channel which drains the area towards Garblies, and to the north of the A96 is a further large bowl which drains the area towards Inshoch. The opening for this drainage is near Millhill, where the modernised drainage channels the water away towards Nairn. All the land to the north of this area is predominantly made up of sand and river silt deposits, and has been substantially remade by the elements over the centuries. It is also worth pointing out that Nairn, Aldearn, Findhorn and Deveron all contain the same root word -earn, indicating an Irish/Gaelic origin. Findhorn and Deveron are named the White and Black earns respectively, Auldearn the old earn – and Nairn conceivably the new earn. Given the movements of the rivers and rebuilding of the landscape, it seems possible that at the time it was built, Auldearn was a castle which could have had an entirely different significance – especially if the river Nairn had flown at its base instead of its current position.

The castle is simple enough to describe. It is a large roundish motte – almost entirely artificial – surrounded by a ditch with a counterscarp bank at the base. Around the top is a raised bank, and in the south-eastern section of the summit are remains of what may have been a tower or hall. The motte is about 8 metres high and the summit measures about 32 metres by 27. It is likely that the bank around the summit is representative of gun emplacements from the 17th century, when a famous battle was fought here. In the centre is a large doocot, ascribed to the 17th or 18th century. Since there is no mention of it in accounts of the battle in 1645, it likely postdates this event.

The castle is known to have existed in the reign of William the Lyon, and probably was founded by him during one of his campaigns in the north to subdue the rebel MacWilliam family who were technically rival candidates for his throne, but more likely had a separatist viewpoint. The earliest mention is as “Eren” in the second foundation charter for the burgh of Inverness, which has been dated between 1173 and 1190. In 1173, William was tempted to invade England in support of Henry the Young King and against King Henry II. He repeated the venture in 1174, but was captured. In both cases his primary objective was to regain control of Northumberland, which suggests his attention was firmly in the south – and it is therefore unlikely that he would have founded a castle at Auldearn in this timespan. After submitting to King Henry, William was allowed to return to Scotland where rebellions had broken out. In 1179 he led an army north into Ross, and again in 1181 but the rebellion continued until 1187. A charter dated to 1185/90 suggests that the castle of “Heryn” (still no “auld” at this date!) had been betrayed to the rebels by the royal marshal, and there is a suggestion that the burgh of Auldearn had been destroyed and was refounded at Nairn. It is known that in 1179 two new castles were founded by William in Ross, including Dunskeath (by Nigg) which is similar in design.

On balance, it seems likely that the castle at Auldearn was founded by William in his campaign of 1179, betrayed to the MacWilliams and destroyed. It is unlikely to have been reoccupied until the latter stages of Williams reign, after Moray had been returned to the royal fold, and then, in view of the establishment of the new burgh at Nairn had become redundant other than as a royal manor. It was probably at this  manor of “Alderyn” that Earl William of Ross signed over Dingwall and other lands to Robert the Bruce in 1308, a new royal castle being established at Nairn. The foundation may be the remains of this manor, although it seems more likely to be later, since the manor house would have been built of wood. The ultimate fate of this manor is unknown, but it is unlikely to have survived the early 14th century. Auldearn Castle is today owned and maintained by the National Trust for Scotland, having been donated by the owners of Boath House in 1947.