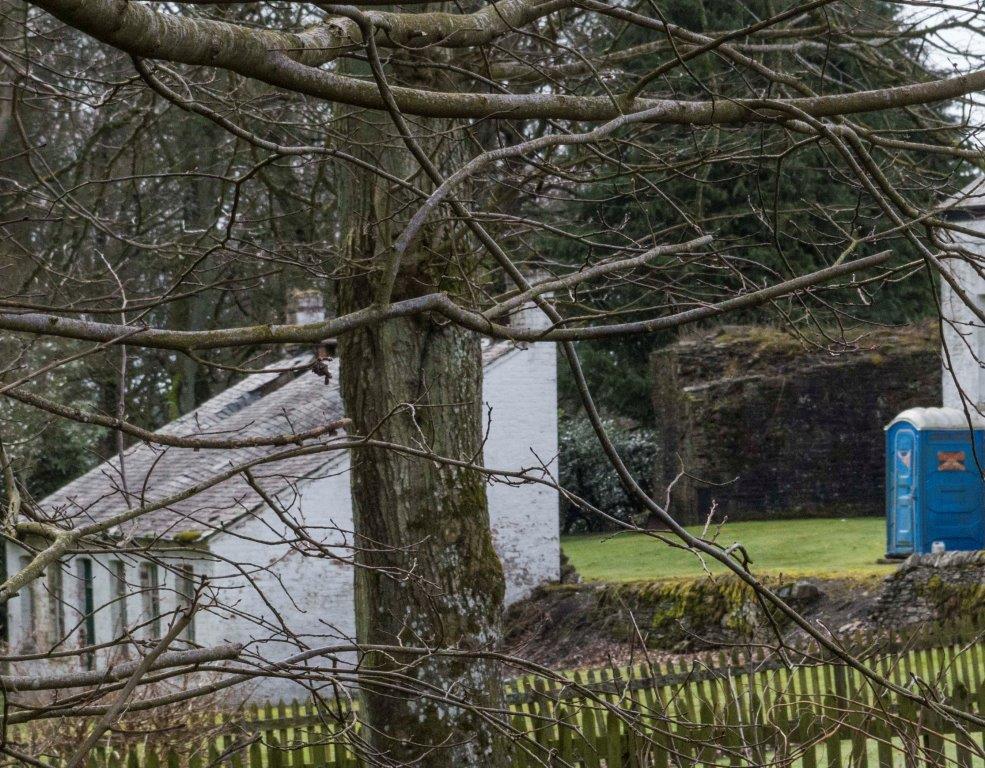 Auchterhouse Castle has largely vanished from existence, the remains being limited to the ruined ground floor of a single square tower referred to as the “Wallace Tower” within the private grounds of the later mansion bearing the same name. Auchterhouse is to be found a few miles to the north-west of Dundee; the site guards one end of a route across the Sidlaw Hills between the coast and Strathmore.

The earliest mentions of Auchterhouse relate to the Ramsay family of Cockpen (Lothian), who held these lands as well as the position of Sheriff of Forfar during the 1240s. Auchterhouse remained in their possession until the male line ended with Sir Malcolm Ramsay, who left a daughter, Isabella to inherit at his death between 1365 and 1380. Isabella was married to Sir Walter Ogilvie of Powrie, and it was either Sir Walter or his father in law who was the Sheriff of Angus killed at Glasclune in 1392 during a savage raid into Angus led by two of the sons of Alexander Stewart, the notorious Wolf of Badenoch and Earl of Buchan. Auchterhouse then remained with the Ogilvies until about 1466, when the office of sheriff and the lands of Auchterhouse passed with marriage to James Stewart, brother of King James II and later Earl of Buchan. The lands of Auchterhouse then remained with the descendants of Buchan until they were eventually sold in the 17th or 18th century.

The old tower is rectangular, and measures about 12 metres across, with walls some 3 metres thick in places. It is clear that the tower has been badly damaged and the external faces are not the original outer face of the tower; it may originally have been square in shape. It is not at all clear how old the tower is, nor what it actually represents. There is evidence that originally the basement was vaulted, and given the thickness of the walls, is likely to date to c1500-1515 at the latest. Contrary to assertions that it is the remains of a mural tower of a 13th century courtyard castle of the Ramsays, this is extremely unlikely, and perhaps we should be considering that it represents the surviving fragment of a late 14th or early 15th century free standing tower. Examination of the Pont maps shows that by c1590 the castle consisted of a tower house of four storeys with a wing and perhaps a courtyard. However this is most likely to be an early representation of the later mansion house, which has vaulted cellars and is therefore most likely 16th century in origin, meaning that the old tower had been destroyed or demolished. The Ogilvies became involved in national politics in the mid 15th century when King James II was trying to suppress the Douglases; the mother of the Earlof Crawford, a Douglas ally, was an Ogilvie of Auchterhouse. Despite this, the Ogilvies are supposed to have fought against Crawford; and since Angus was a principal battleground in the 1450s, the castle may have been sacked at this point. Coming into the damaged property by marriage, James Stewart would potentially have then built a new tower house, shown on Pont’s map, which then developed into the much extended and modernised mansion we see today.

After a period of disuse during which the condition of the buildings deteriorated markedly, the mansion was in use as The Old Mansion House Hotel for some years, but this closed down, and in 2001 the building reverted to private use. Photographic records show there was some good quality 17th century plasterwork within the great hall, but as the property is very obviously signed as a private residence, this cannot be seen by the public, and views of the old tower are extremely limited from the public road. The image shown has the tower in the right background.