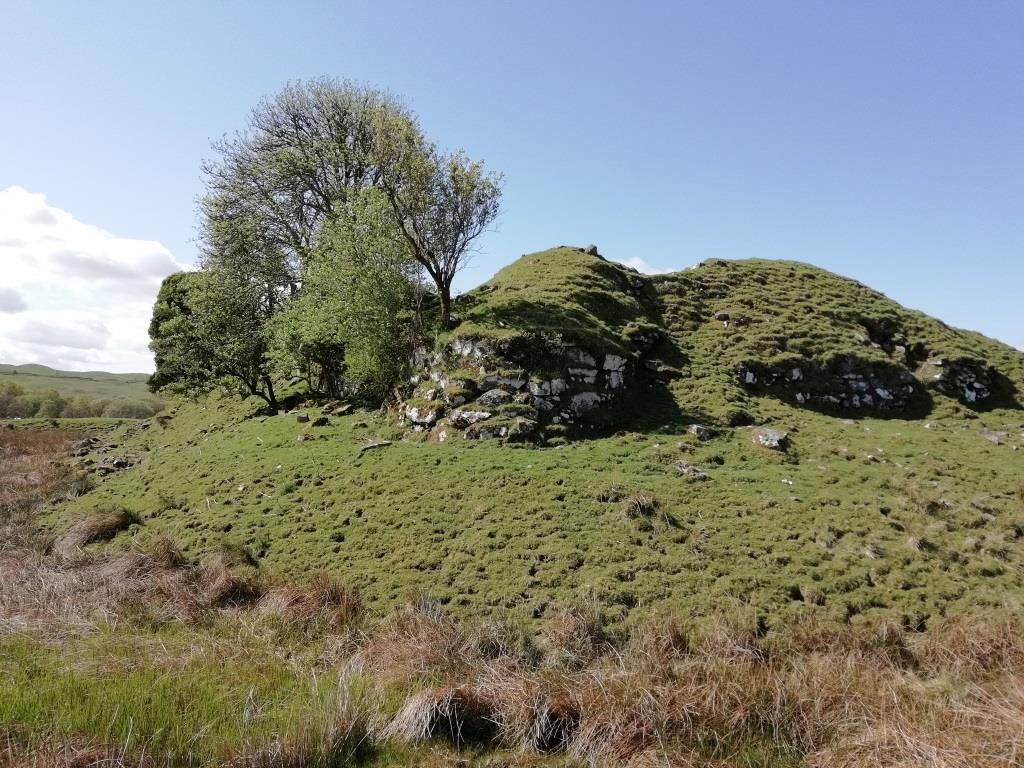 Auchen Castle occupies high ground overlooking the Garpol Water, which runs to the west and south, and the Evan Water to the east – and has spectacular views down Annandale. The ground on all sides except the north-west becomes boggy as you go down the slope, meaning that the best way to approach the castle would always have been from the slightly higher ground to the north. The castle is not signposted, and there is no parking facilities offered at the nearby farm.

The site started out life as an impressive courtyard castle about 40 metres square with at least one round tower at the NW corner, and a simple arched entrance midway along the north wall. This entrance was later defended by a rectangular barbican, and the whole castle was surrounded by a substantial wet ditch 12 metres wide and at least 2 metres deep. The curtain walls were roughly 3 metres thick, and whatever courtyard buildings were present have been entirely hidden by later alterations and collapse. This castle was slighted in the Wars of Independence and repaired later, being strengthened with the barbican and the SE tower being rebuilt. The curtain wall as it stands today is revetted with stone on both sides and filled in with earth, which is not comparable with the fine masonry of the gate area, suggesting that the curtains required a fair amount of repair as well. Perhaps at this time the NW tower was also filled with rubble, and a solid bastion created at the NE corner as well.

At a later date the curtain wall was thickened and lowered in height, and the area to the rear of the walls was revetted. This phase involved the conversion of the old castle into an artillery fort. Outside the castle to the north it seems probable that additional earthworks were in place and defended with a palisade in the 13th century; later these were converted into fishponds which also served as an outer defence. Rather curiously there is an underground passage associated with the outworks to the east which terminates in a subterranean guardroom type structure which is badly ruined. This appears to have been a kind of bunker, but if and how it was connected with the main castle is not clear.

The castle was held by the Kirkpatrick family in the early 14th century, and who may have had previous residences upstream along the Garpol Water; there’s a moated site and a motte & bailey castle not too far upstream. Sir Roger Kirkpatrick of Closeburn was the owner, an associate of Robert Bruce who collaborated with the English along with his lord, but joined him in rebellion in 1306, in tradition wielding the dagger which is supposed to have finished off John Comyn at the altar in Dumfries. However, the Kirkpatrick occupancy of Auchen Castle was probably at English instruction, since the castle passed to Thomas Randolph, Bruce’s nephew, when he secured the area. It was most likely the Randolphs who repaired the castle, and as the next recorded owners are members of the Douglas family, it may be that Auchen Castle was one of several strategically important parts of the Randolph estate which was “acquired” by the crown in 1346 when John Randolph died, and not eventually granted to his nephew John Dunbar (who may not even have been born at this date – his elder brother George, later Earl of Dunbar, was born c1338).

Exactly what happened to Auchen Castle then is unknown. However, in 1387 the former Randolph lands of Nithsdale were given to Egidia Stewart, a daughter of King Robert II, upon her marriage to William Douglas, an illegitimate son of Archibald the Grim, 3rd Earl of Douglas. He died in 1391, and his son disappears from records in about 1408 without having married. It is notable that after Randolph, the next known holder of Auchen is Douglas of Dalkeith, married to a daughter of Robert III. It is possible that Auchens reverted to the crown in 1408 and was again part of a marriage portion. However it did not stay with the Douglases, and according to the scheduled monument listing it was granted to the Johnstons of Corehead. However by 1489 it was held by the Maitland family, as Robert Maitland of Auchencastle acquired the castle hill of Tibbers in that year. John Maitland of Auchencastle was recorded in 1532, and an unnamed Maitland of Auchencastle in 1587. The Maitlands remained the holders of Auchen Castle until it fell into decay, but there is no further history associated with the castle that could indicate when it was finally abandoned. It is likely that the Maitlands were responsible for the thickening of the walls and conversion to an artillery fortress, although it has been noted there are similarities between the south-west tower and the open D-shaped towers at Threave, seat of the Earls of Douglas in Galloway. It is to be assumed that Auchen Castle had fallen into disuse by the 17th century, although this is only a supposition.