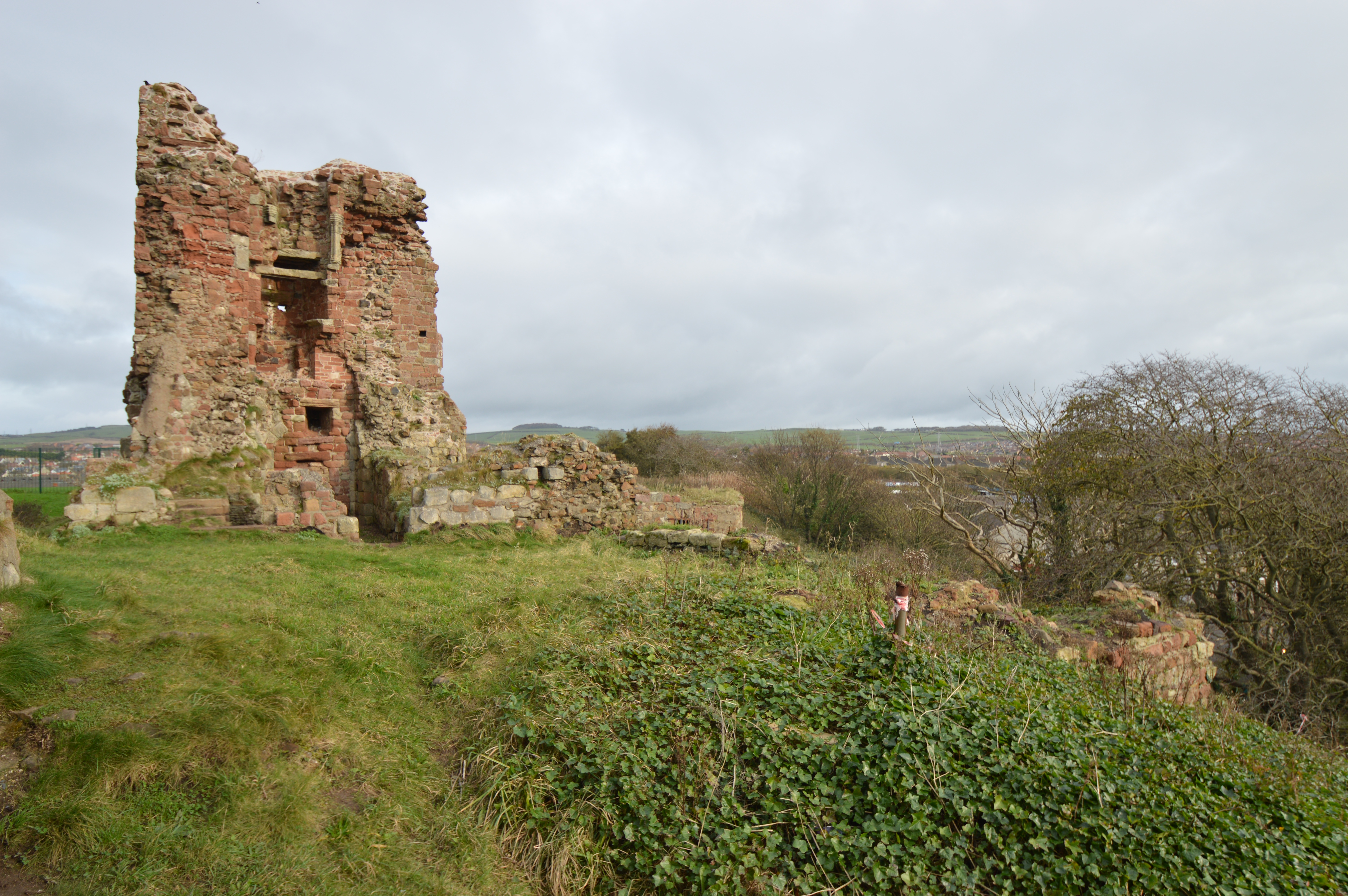 Ardrossan Castle occupies a prominent outcrop in the centre of the town of Ardrossan on the Ayrshire coast. To either side of the outcrop are large sandy beaches, the easternmost of which has the mouth of the Stanley Burn in the middle of it. The castle consists of the ruins of a quadrangular courtyard castle with ranges of buildings to the north, west and south, and which included a rectangular tower house. There are suggestions of a perimeter ditch in places, but if this is the coorect interpretation, the remains do not extend all the way round the castle. When I visited it was possible to gain access to the ruins, but it is now considered dangerous and is fenced off with security cameras.

The early history of Ardrossan Castle is fairly mysterious. Although it is said that the castle was founded by Simon de Morville in the 1140s, and that the Barclay family held it subsequently, the earliest record is of Richard de Barclay, lord of Ardrossan as a witness to a charter to the Abbey of Kilwinning by Richard de Morville, dated tentatively to the mid 12th century. However, by the reign of Alexander II, a series of individuals bearing the designation “of Ardrossan” appear in documents, first Arthur, then Hugh, then Fergus and Brice, and finally Robert. In the late 13th century Ragman Roll appears Godfrey de Ardrossan, and Godfrey, Fergus, Robin and Hugh all appear in the early 14th century. Whether Richard de Barclay had descendants who adopted the name of their lordship is not clear, but we must assume that the earliest phases of the castle are the work of this family. The last that we know of is a second Godfrey, who witnesses several documents in the reign of David II, and died c1357. Ardrossan then passed by marriage to the Eglinton family, and in the 1380s the Eglinton male line also failed and the estates passed to the Montgomeries of Eaglesham, with whom it remained for the rest of its occupied life.

The earliest phase of the castle that we can identify is a plain rectangular courtyard defended by a stone wall and simple gatehouse to the north-east, with a range of buildings running southwards along the east courtyard wall. This has been dated to the late 13th or early 14th century, suggesting that earlier lords “of Ardrossan” may have had a castle or defended manor here made of timber only. This stone castle was destroyed, probably during the Wars of Independence, and rebuilt; the gatehouse was rebuilt from the first floor upwards, but not as high as it stands today. Then, over a period of time, the gatehouse was converted into a tower house, and ranges of buildings were erected along the west wall and south wall, with a small rectangular tower being erected in the south-east corner. Stylistically this work was completed during the early 16th century at the latest, and probably started when John Montgomery was made the first Lord Montgomery in 1449. The work included the blocking up of the old entrance through the gatehouse, and relocating it to the north wall.

In 1528 Ardrossan Castle was attacked and burned down during the feud between the Montgomery and Cunninghame families, and although the castle was repaired it ceased to be used as a principal residence of the family, and was allowed to fall into decline. In 1654, it was used as a quarry by Cromwells troops when building the Citadel at Ayr.