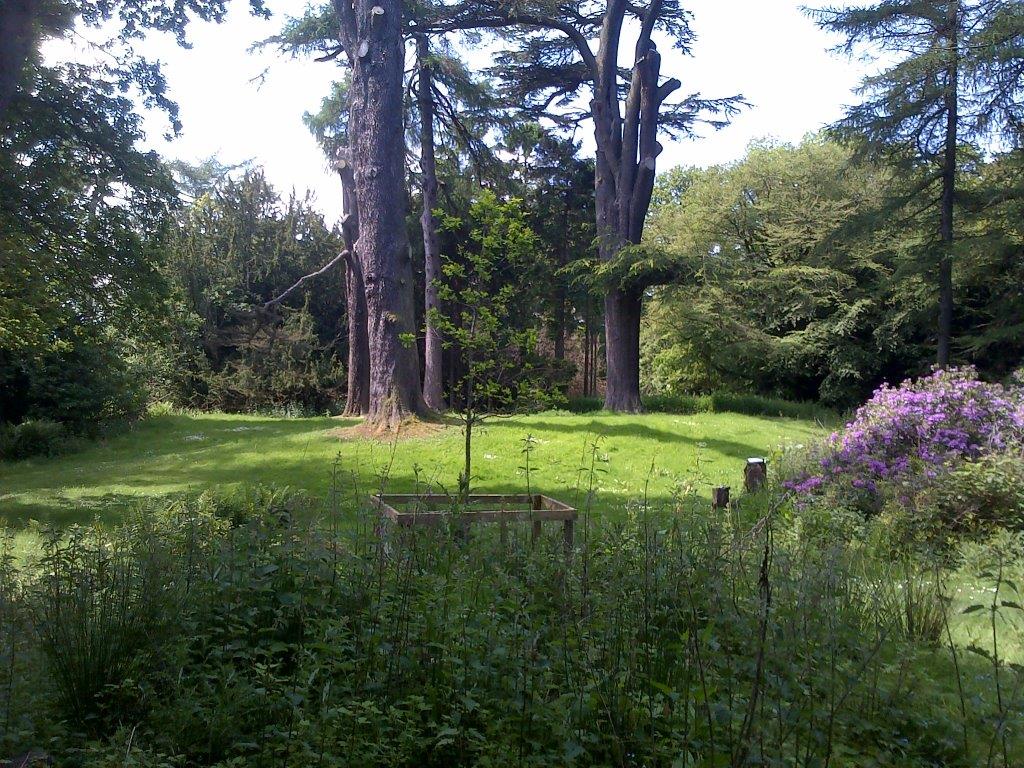 Abercorn Castle occupies a strong location overlooking the Firth of Forth, now within the grounds of Hopetoun House in an area called “the Wilderness”. The location is a steep sided ridge sloping to the north down to the sea, and to the south bounded by a deep gully containing the Cornie Burn. The castle was once a formidable site, but was destroyed in the 15th century.

Abercorn was in the possession of Robert de Avenel in the second half of the 12th century, who also held the title Justiciar of Lothian under King William. He was descended from an Anglo-Norman family and either Robert of his father William were probably granted the lands during the reign of King David I. The de Avenels also held Eskdale and were significant landowners in the south of Scotland, and were close enough to the crown for King William to have an illegitimate daughter by Robert’s daughter Alice. In the 13th century, Abercorn passed to the Graham family of Dalkeith with the marriage of the heiress. Their son Nicholas swore allegiance to Edward I in 1296.

In 1341, John Graham died and his sister Marjorie inherited his estates, including Abercorn. She was married to Sir William Douglas of Lothian, and for the remaining century or so of its life, Abercorn Castle was the property of the Douglases, and one of their chief strongholds in Lothian. When the Douglas family rebelled in 1452-55, King James II decided to besiege Abercorn, and in 1454 an army of 6,000 men under the Earls of Orkney and Angus arrived to carry out the task. Concerned by rumours of a Douglas army, the king raised the siege in the winter, but by Easter 1455 had returned with his formidable artillery. The Earl appeared unable to decide whether to face the king – and thus commit outright treason – or abandon the important castle. In the end, Douglas failed to appear, and the castle was lost after a four week bombardment around Easter. When the castle was either taken or surrendered, the senior members of the garrison were hanged, and the castle was demolished.

There are no descriptions of Abercorn Castle that are coherent enough to arrive at an understanding of it. It appears likely that the ruins remained on site, and parts may have been reused to build a manor and watch tower. Any earthworks would also have survived, probably consisting of ditches across the ridge protecting the approach from the east. Images from the 16th and 17th centuries certainly imply this may have been the case. Given the location high upon a ridge, it is likely that the castle consisted of a large walled enclosure on the highest point of the ridge behind two or more ditches and banks which probably existed as early as the 12th century and may have been multiplied by the Douglases as a response to the threat of artillery.

Abercorn was forfeited to the Crown when the Douglases were outlawed, and granted to Claud Hamilton, Lord Paisley in the 16th century. In 1606, his son was created Earl of Abercorn. After a number of transfers of ownership (and reductions in size), in 1678 the estate of Abercorn passed to the Hope family, who were to built Hopetoun House towards the end of the 17th century. The castle site was presumably cleared of all debris and landscaped after this, and although faint traces suggesting ditches can still be made out in the woods, any trace of the castle has long since disappeared. Archaeology carried out at the site of the mound did find traces of buildings considered to date from the 15th or 16th centuries, reinforcing the idea that parts of the castle were repaired and reused, although these remains were reburied and their location only roughly known today. These would predate the Hamilton grant and represent royal usage.

Today it is possible to walk to the site of the castle and look around but an entrance fee to the grounds of Hopetoun House applies.