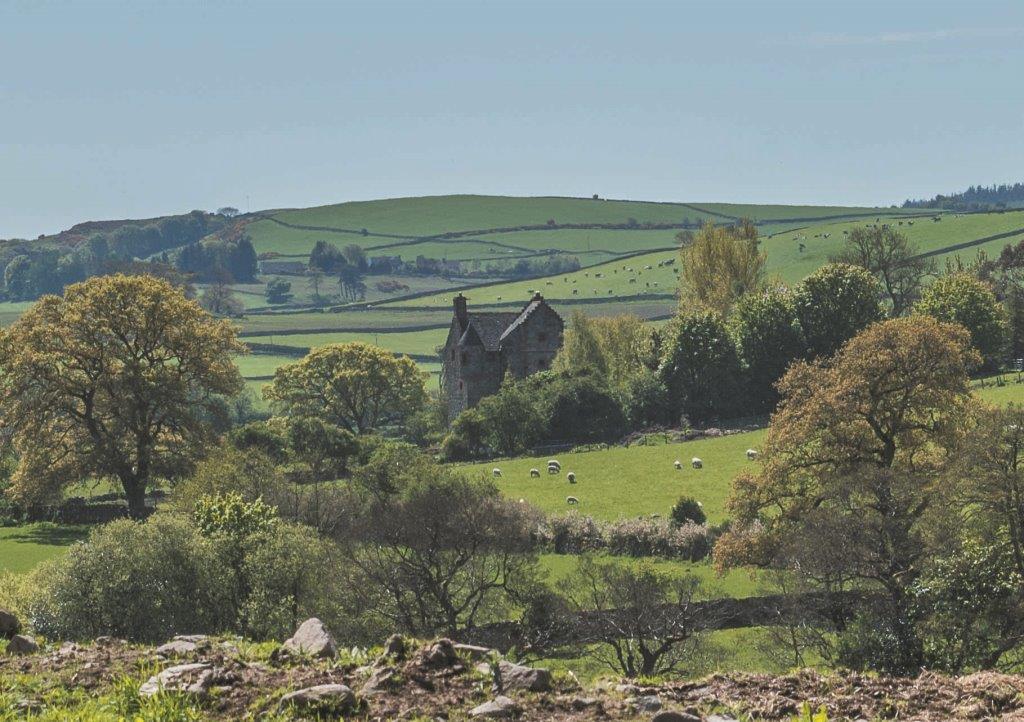 The Abbot’s Tower is a privately owned and occupied tower house dating to the 16th century. It sits on the south-eastern end of a hill and looks out over a low-lying area of land surrounded by hills on three sides, and the confluence of the New Abbey Pow with the estuary of the River Nith. It is a fairly modest L-plan tower that was in ruins by the 18th century, and has been completely restored. When I visited and had a chat with him, the owner expressed his displeasure at the number of people invading his privacy, since it is not possible to photograph the tower without doing so.

The name is not associated with the active history of the tower, although the property did belong to Sweetheart Abbey in the medieval period. They were leased out, and the tenant in the 16th century was Thomas Brown, related to the Browns of Carsluith. His elder son succeeded him as the laird of “Landis” as the property was known, and the younger became Abbot of Sweetheart in 1538. Only three years later Abbot John granted his brother a number of lands in feu, and further grants followed until 1586, by which time Cuthbert had been succeeded by his son John as laird of Landis. By the time Timothy Pont was putting his maps together in the 1590s, the tower had been constructed, and the general consensus is that it was built later rather than sooner, although the exact date is unknown.

The entrance to the tower is in the re-entrant angle, and leads directly to the winding stair leading to the first floor, as well as to the (unvaulted) basement, lit by small slit windows. Upstairs, the hall was supported on timber beams, and was provided with a large central fireplace and a mural cupboard/garderobe. The second floor was divided into two chambers, the first having a mural chamber/garderobe – the attic level was too badly ruined by the time anyone thought to describe it to be properly understood, although there were two diagonally opposing turrets, both square in plan. The tower did have a barmkin and associated buildings, but virtually nothing survives of these today.

In 1611, John Broun (II) succeeded his father in Landis, and the following year sold them to his brother Gilbert. Only three days later they were annexed by the crown and wadset (mortgaged) . to an Edinburgh burgess showing that John had debt troubles. In 1627 the estate and title of Landis passed to the Hay family, who had purchased the wadset, only to resign it to the crown again in 1633. Briefly the lands, with the tower, became part of the short-lived Bishopric of Edinburgh, before being incorporated into the free barony of Landis and granted back to the Hays. In 1740 the superiority of the barony was successfully claimed by John Spottiswood after much to-ing and fro-ing, and he broke the estate up. By 1790 the estate was held by the Maxwells of nearby Kirkconnel, and the tower was roofless, a new farm of Landis having been built on the hill above.

I am much indebted to Alastair Maxwell-Irving for this history.

The tower was purchased in 1989, and restored for occupation. It is not open to the public but is run as a bed and breakfast.